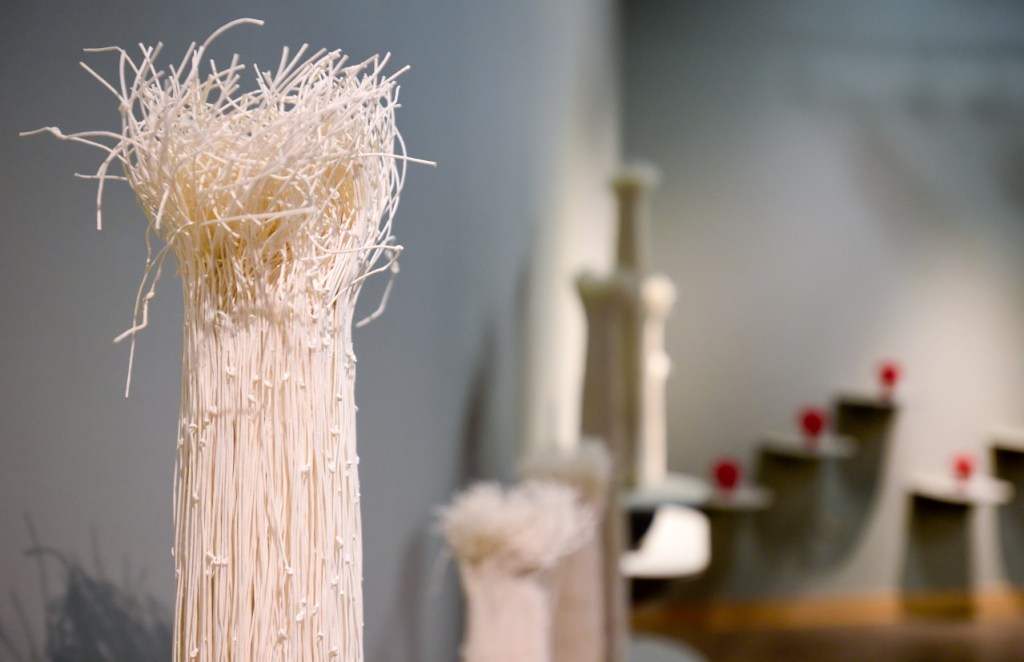 In 2016, the Longmont Museum highlighted the intricate and eye-catching work of international contemporary origami artists with the exhibition “Above The Fold” – curated by Los Angeles-based Japanese art historian Meher McArthur.

The show, which featured 60 hand-folded koi fish, proved to be a favorite among visitors.

“This exhibit was so beautiful and so popular with the community, so we were interested in exhibiting another one,” said Joan Harrold, Longmont Museum’s marketing and development manager.

“It’s very exciting to hear how people from various parts of the country are reacting to artwork from Japan, especially in areas where Japanese art is rarely shown,” McArthur said. “It’s always funny when friends who live thousands of miles away tell me they’ve visited an exhibit I curated and enjoyed, especially when I haven’t seen it myself yet.”

Previously on display in Allentown, Pennsylvania, the Longmont Museum is just the second place the dazzling collection has landed.

Jared Thompson, Curator of Exhibitions at the Longmont Museum, is delighted to offer guests “an exposure to the art of another culture.”

“Washi has been around for over a thousand years,” Thompson said. “These artists are pushing it to a new level.”

Hina Aoyama’s delicate and impressive creations show the power of a steady hand and a lot of patience. Her lace-like paper cutouts — made with scissors, not an exacto knife — exude a quiet essence.

From highly detailed butterflies to a silhouette of a geisha, Aoyama’s subject matter delights the eye, with nods to her culture and the harmony of nature.

Executed with precision, the framed pieces draw viewers in for deeper reflection.

Among the whimsical creations, some of his works feature a script that has an ancient feel to it. At first glance, one would assume that this is a love letter dating back centuries. She immortalizes the words of the philosopher Voltaire with a thin paper cut from his writings.

In the past, she has also taken the works of the poet Baudelaire and cut them out of origami paper. The daydreams of these iconic characters, reflected in pin-width calligraphy, take on new meaning when displayed in such detailed cursive.

According to Aoyama’s Wikipedia page, her desire to incorporate them into her art “is not because she is interested in their works or their poetry, but because she is drawn to their personalities and lives.” .

Either way, her nod to deep thinkers of the past is a thoughtful way to honor those who came before her.

Some of his work takes months, but for Aoyama, who views his laborious technique as a meditative practice, it’s worth it.

In Japanese culture, many gifts are adorned with mizuhiki, colored rice paper cords that wrap around packages, similar to ribbons.

Certain knots made with the material are intended to signify an unbreakable bond between the giver and the recipient.

In a section of the Longmont Museum, 20 of his crimson-colored offerings – part of the “Japanese Paper Strings” – are placed on pedestals that jut out from the wall.

Seeing them all together, one can feel the urge to imagine a walk through an otherworldly garden, or perhaps under the sea.

Her black and white nest-like vessels – also made from mizuhiki which she stretches by hand – have an incredibly organic quality and almost seem to offer movement.

“The pieces looked good in photos, but they look even better in person,” Thompson said.

Eriko Horiki – another artist featured in the exhibition – left a career in banking to create stunning designs from mulberry paper.

His works – from room dividers to stunning lights – are often used in lobbies and restaurants to elevate architecture and ambience to a whole new level of luxury and sophistication.

Another piece that impresses with its scope and size is “Blessed Rain” by Ayomi Yoshida.

24 striking washi sheets, with woodblock designs printed on indigo dye, hang from the ceiling. Ever-so-subtle circles and dashes can be found on the paper, which really does look like fabric.

The dramatic presentation – almost in a semi-circle – invites viewers to stand inside for a moment of meditation.

From pieces that use worn pages from old Japanese books to those that look like petrified wood, the variety of work is vast.

While an opening reception, originally scheduled to take place on Friday, has been postponed to an as-yet-undisclosed date, organizers hope to eventually hold an opening that will include a karaoke lounge in a nearby atrium and a musician playing Koko – a Japanese plucked half-tube zither instrument.

Although a date for this event has yet to be set, the museum is offering a host of activities in conjunction with the exhibit which will be on site until May 15.

On February 17, as part of the museum’s Voices of Change series, organizers will welcome members of the Mayeda, Kanemoto and Tanaka families to offer a deeper reflection on the Japanese-American experience at Longmont.

This year marks the 80th anniversary of Executive Order 9066, which led to the imprisonment of 120,000 Japanese American citizens.

“It’s important to work with the community and try to co-create as much as possible, especially when it’s someone else’s culture,” Harrold said.

People will have the opportunity to explore various creative Japanese-inspired traditions through Thursday night classes – classes for adults that allow people to get together, enjoy a cocktail and try their hand at a new activity for 35 $.

Movies, from “Kusama: Infinity” to 1954’s “Godzilla” are also part of the layered lineup.

The staff anticipates “Washi Transformed” will appeal to those living in the Front Range and beyond.

“We want to expose people to world-class art without having to travel to Denver,” Harrold said.

In addition to being committed to showcasing a variety of international works, the Longmont Museum is committed to making admission accessible to everyone, regardless of income.

Anyone with an EBT or Snap card can enter the museum for 25 cents. There are also museum passes available at the Longmont Library.

Admission to the exhibit is $8 for adults, $5 for seniors and students, free for children 3 and under, and free for museum members.

As part of the traveling exhibit, Longmont Museum Exhibitions Technician Brack Lee invites visitors to walk through a portal gallery that will offer more of a tactile experience.

“They will be able to smell finished paper samples made from Gampi, Kozo and Mitsumata tree fibers,” Lee said. “We will also have samples of the raw bark strips, but these will be in a case.”

Paper-making tools and a video will also be part of the interactive section.

“I hope that visitors will also be impressed by the many different ways in which these artists work paper, which is usually two-dimensional and seen as a surface of works of art, such as painting or calligraphy, and transform it into elements often dynamic, three-dimensional, and spectacular works of art,” McArthur said.

Subscribe to our weekly newsletter, In The Know, to receive entertainment news straight to your inbox.