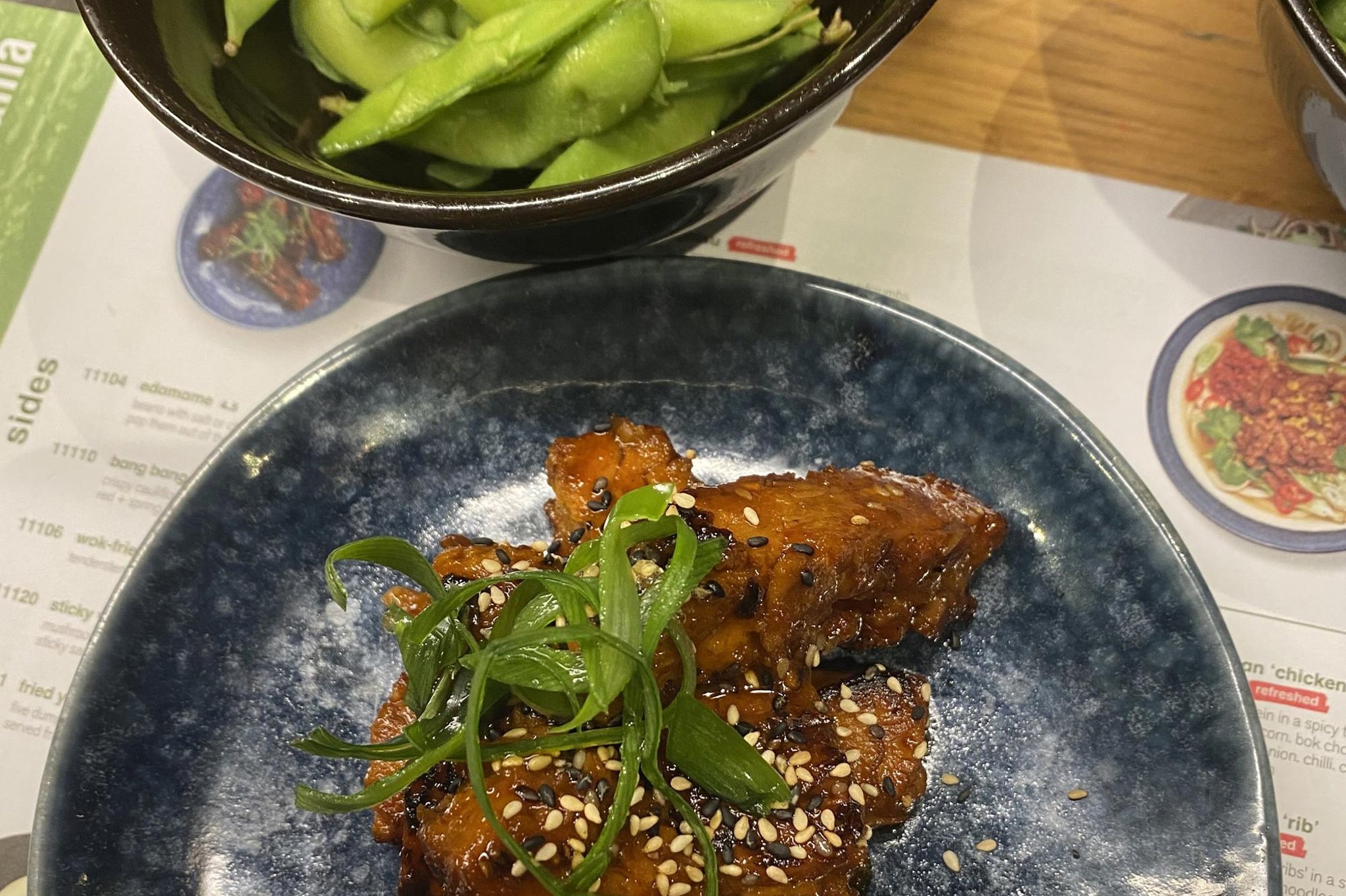 Normally, the dish sleuth would be hesitant to visit and pass judgment on a channel such as Wagamama, of which there are 149 in the UK. However, only one of them is in Portsmouth – Gunwharf Quays – and since the arrival of a promising new vegan menu, DD felt it was justified to visit and dive into some of the pan-fried Asian dishes inspired by flavors of Japan. .

Upon arrival, DD and their companion were warmly greeted by staff and led through the canteen-style dining room to a spot overlooking the Solent and – because that particular night was when Storm Eunice was about to hitting its destructive stride – the vigorously flapping masts of boats and the tables and chairs outside various places ready to take flight.

Our waiter, who was particularly chatty and attentive, took our drinks order, a large peach iced tea (£4) and a large tropical smoothie (£4.95) – not vegan as it contained honey – and then started scribbling our table number on each menu in a particular style that anyone who has ever visited the restaurant knows to be distinctly Wagamama.

Register to our daily newsletter

The newsletter mute the noise

We started with a favorite of mine – edamame beans (£4.50) – a simple but nice palette cleanser and not an unhealthy start to a meal, except perhaps for the generous layer of salt. Feeling decadent, we then decided to move on to our entrees. I had chosen sticky vegan ribs (£6.75) and my companion, the crispy fried squid (£7.25).

The chunks of mushrooms and soy protein, coated in sticky sweet and spicy sauce, sesame seeds and spring onion were just that – sweet and spicy with a very decent attempt to replicate the rich and chewy characteristics that the fleshy ribs are known.

Aware that I was technically on my second starter and in an effort to make room for my main, I reluctantly left some coins. However, my plan to leave the venue was quickly derailed when I was offered one of my companion’s spicy shichimi squid balls, with chilli and cilantro sauce. Those tender, large portions of calamari were enough to win me over and if I hadn’t been looking forward to my next course, I would have ordered another round.

Our mains came quickly and the portions did not disappoint. I opted for the yasai katsu curry (£10.25), a vegan version of the popular chicken katsu curry, which offered a meat substitute of sweet potato, aubergine and butternut squash, coated in panko breadcrumbs and fried . A hearty and tasty dish served with sticky white rice and salad.

Fueled by intrigue over what desserts Japanese cuisine would present, I alone – my mate argued they couldn’t eat another bite – ordered the banana katsu (£6.50) for dessert . Of course, when the crispy fried banana, served with vegan miso caramel ice cream and caramel sauce arrived, my mate’s hunger miraculously returned.

This caused a rather unworthy fight for the last bit, as this unique Japanese dessert looked like sweet caramel heaven.

Wagamama, already considered a staple Japanese favorite, has now risen in Dish Detective’s ratings. Not only for its freshly cooked and prepared meals, but also for its wide vegan offering that makes an admirable and admittedly odd effort to replicate meat dishes that will appeal to the taste buds of vegans, vegetarians and meat eaters.

A message from the editor, Mark Waldron