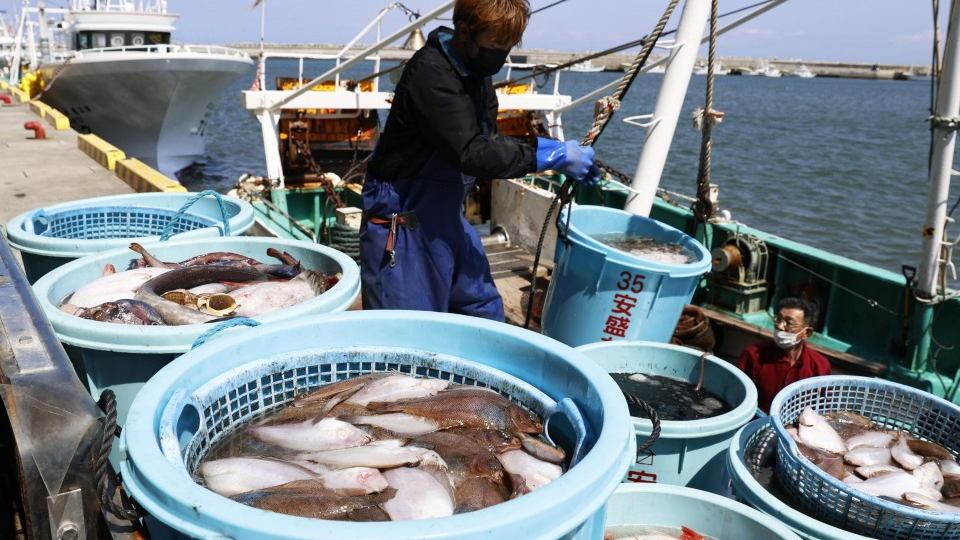 Taiwan on Monday lifted a ban on food imports from Fukushima and four other Japanese prefectures imposed following the 2011 Fukushima nuclear disaster.

As part of efforts to garner Japan’s support for its bid for the Trans-Pacific Partnership free trade agreement, Taiwan’s Food and Drug Administration said the ban on food products from Fukushima, Ibaraki, Gunma, Tochigi and Chiba will be “adjusted” for risk — a change in the ban based on production areas.

The ban has been lifted, except for certain food products such as mushrooms and meat from wild animals. Food products from the five prefectures must always bear prefecture-specific origin labels and documents proving that they have passed radiation inspection.

A fisherman unloads fish at a port in Soma, Fukushima Prefecture on April 12, 2021. (Kyodo)

In March 2011, a strong earthquake and tsunami caused meltdowns at the Fukushima Daiichi nuclear power plant. Following the disaster, 55 countries and regions introduced import restrictions on Japanese food products, but most have already lifted them.

In a referendum in 2018, Taiwanese voters chose to keep the ban, after which President Tsai Ing-wen’s government continued to ban food imports from prefectures.

But the government had also argued that easing the ban would make it easier for Taiwan to join the trade deal, officially known as the Comprehensive and Progressive Agreement for Trans-Pacific Partnership.

Japan played a leading role in the trade pact negotiations after the United States pulled out in 2017 under President Donald Trump’s administration.

Jane Lynch: Fascinated by the “random exercise of power” for one’s own good (usually by men); How Air Guitar identified her as a free spirit and not a “depressed child”