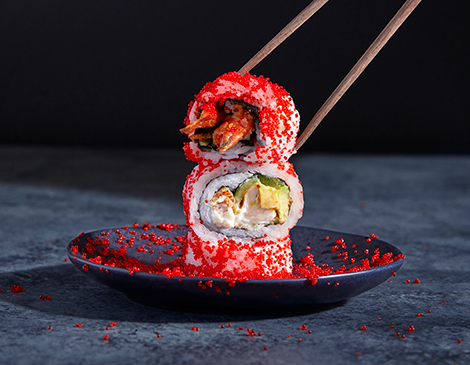 Bret Adams wants everyone to have the chance to love sushi as much as his five children. “They are the origin of the word ‘junki’ because they are self-proclaimed sushi addicts,” he says. This is the sixth restaurant concept for Adams, founder of the Chef Art For Restaurant Group behind Burntwood Tavern and Leo’s Italian Social. And despite a rocky start evident in early Yelp reviews, the restaurant appears to be finding its way into the path of the company’s popular predecessors.

Here are three things to know before you go.

Space
Sushi Junki may be located in an upscale suburb, but when you walk in, Adams wants you to feel like you could be in the middle of a big city. Servers clad in t-shirts are pierced and tattooed, with rock music playing softly in the background, an attempt by one restaurant to give Sorrow an edge. The stark white decor, from the walls to the placemats, is interrupted only by a giant blue-hued octopus mural and the colorful food on your plate. It’s a tight space, with about a dozen counters downstairs. Upstairs, however, can accommodate 40 people, and in warm weather the patios will add extra seating to extend those modern Zen vibes. “We want to add a Japanese maple in the middle of the back patio to create cover and a serene environment,” says Adams.

The food
The sparse white interior leaves room for the food to shine, bringing vibrant pops of color in fresh-cut sashimi, expertly molded nigiri and hand-rolled sushi. Chef Thai Vue and Eric Stout have developed offerings that blend centuries-old style with current tastes to provide suburban diners with a menu that’s both adventurous and approachable. The nigiri ($5), for example, is unmistakably traditional: hand-pressed sushi rice topped with ingredients like bright orange salmon (nama sake) and shimmering sea scallops (hotate gai). Meanwhile, the rainbow-hued 79 West roll ($17) is all contemporary, making good use of red and white tuna, yellowtail and salmon fillings. “Our menu isn’t necessarily stereotypical, it’s always done the same way,” says Adams. “It’s a bit of an abstract art.” Since opening in December, they’ve revisited and reworked the menu, removing Wagyu beef and sea bass entrees to focus instead on the sushi and pho their customers crave.

The drinks
Whether you want bold sake, good old Miller Lite, or something in between, Sushi Junki’s drink list runs the gamut. “We have a very varied but not overly complicated sake menu,” Adam says, “but if you just want a beer, we can accommodate that too.” In the middle is a cocktail menu showcasing Asian-inspired flavors like ginger, matcha, and honey. The old-fashioned, favorite of the Americans, is subtly transformed by swapping bourbon for a golden Japanese whisky.

Try that: Sushi Junki’s Spider Roll ($15) puts an end to the age-old diner concern that sushi might not be a big enough meal. This unusually large roll (called a futomaki) appears with cheerful colors and competing consistencies. Its star ingredient is tempura-breaded soft-shell crab, delicate and gooey on the inside but perfectly crispy on the outside, with the legs still intact and sticking out the ends of the roll. It comes with crunchy cucumber and smooth avocado cream cheese, all wrapped in a full sheet of nori, topped with sweet rice and sprinkled with bright red fish roe. “The whole is a very beautiful contrast of textures,” says chef Eric Stout. “You have a multitude of different tastes as you progress.”

Art On Toast: This Japanese Artist Creates Stunning Art On Slices Of Bread