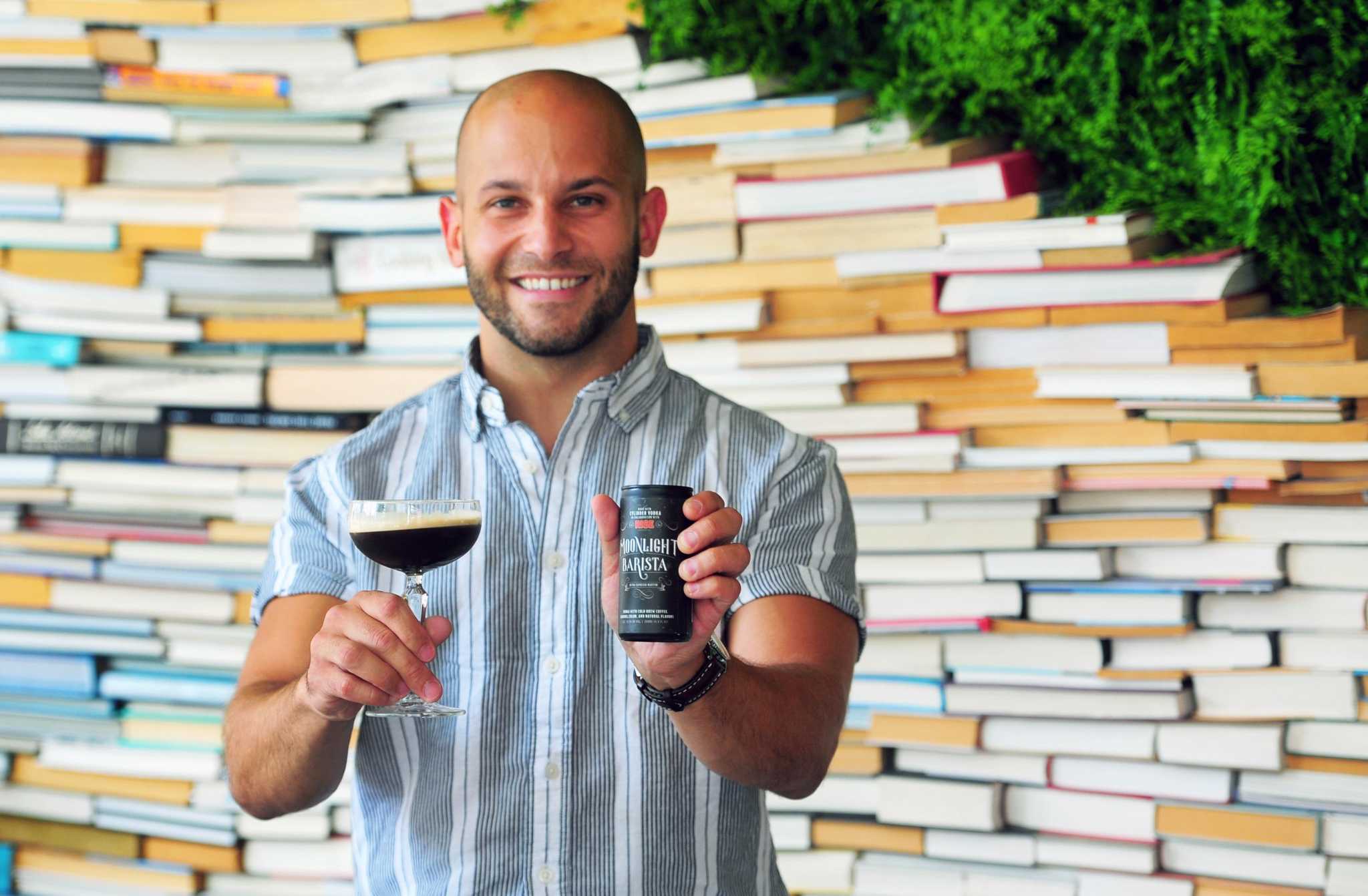 STAMFORD — Two Stamford-based beverage startups have worked together for several years. Now they finally have a collaboration that customers can find on the shelves of local liquor stores.

This week marks the launch of Moonlight Barista, a nitrogen-infused espresso martini that combines CoreBev Group’s cylindrical vodka with cold brew coffee from Rise Brewing Co. The new concoction responds to the growing popularity of canned cocktails over the of the past two years, with the two companies having lined up a number of retail and restaurant establishments in southwestern Connecticut to sell the beverage.

“It means a lot because with this product, we had to overcome many hurdles to release it,” CoreBev founder and CEO Stelios Stavrianos said in an interview. “It really feels good to hold one in my hand.”

As they considered collaborating on a packaged product, CoreBev and Rise executives noticed growing consumer interest in canned espresso martinis. The trend was spurred by the availability of pre-made mixed drinks at liquor stores, which remained open as “essential businesses” during the early stages of the pandemic, unlike restaurants and bars which had to suspend their catering service. . Sales volume of pre-mixed spirit drinks or “ready-to-drink” products increased 55% last year in the United States, and a 57% increase is forecast for this year, according to IWSR Drinks Market Analysis .

“We looked at the market and we knew how well espresso martinis were doing. There’s not much on the market that really focuses on quality ingredients in vodka and coffee, besides being dairy-free,” said Jarrett McGovern, co-founder and director of the creation of Rise, in an interview. “A bunch of these concoctions contain whole milk and they taste too sweet, sugary, or creamy.”

While they were confident in the demand for their product, widespread supply chain disruptions complicated the development of Moonlight Barista.

“We had supply issues with the ingredients we needed to make the product,” Stavrianos said. “There was a worldwide shortage of cans. But we have not given up. »

Today, these obstacles have been overcome. Moonlight Barista’s vodka and coffee are made in Connecticut, then canned at a plant in Saratoga Springs, NY

The drink is on sale at retailers including Stew Leonard’s Wine & Spirits, which plans to initially sell the product at its Norwalk store and add it to its Danbury and Newington locations in the coming weeks.

“Moonlight Barista is a ready-to-drink espresso martini that actually tastes like an authentic, classic espresso martini you might have sipped in a cocktail bar,” said JoAnn LoGiurato, wine specialist at Stew Leonard’s Wines & Spirits. in Norwalk, in a statement. . “The Leonard family also liked that it was made with coffee from another local company: Rise Brewing Co., in Stamford. The can is infused with nitrogen, so when you shake it, it froths up for a nice head on top of the cocktail. It’s balanced, not too sweet, and the pure espresso flavor comes through beautifully.

A number of catering establishments will also serve the drink, including Winfield Street Coffee, which will offer it in its Stamford stores; Naples, Florida; and a soon-to-open location in Rye, NY

“Winfield Coffee is pleased to offer Moonlight Barista,” Winfield owner Breno Donatti said in an email. “We have a long history of serving both Rise and Cylinder Vodka, and are proud to support these businesses, both local to Stamford. They are known for their quality and we love serving quality products to our customers.

Retail and restaurant distribution reflects the different ways Moonlight Barista 15.5% ABV can be consumed. It can be drunk from a can, but it can also be shaken with ice and strained into a martini glass.

“The time when you drink one is not in the morning. It’s something you want to enjoy in the evening – either as a ‘pre-game’ cocktail or something you want to have before dinner or after dinner,” McGovern said. “It’s up to consumers at home to enjoy the best barista experience they’ve ever enjoyed, but in the comfort of their own home. It also gives restaurants the confidence to serve an incredibly flavorful and consistent espresso martini, every time, out of the box.

Encouraged by the launch of Moonlight Barista, Stavrianos said he expects CoreBev to collaborate with Rise again on other products.

“We work very well together,” he said. “We want it to continue.”