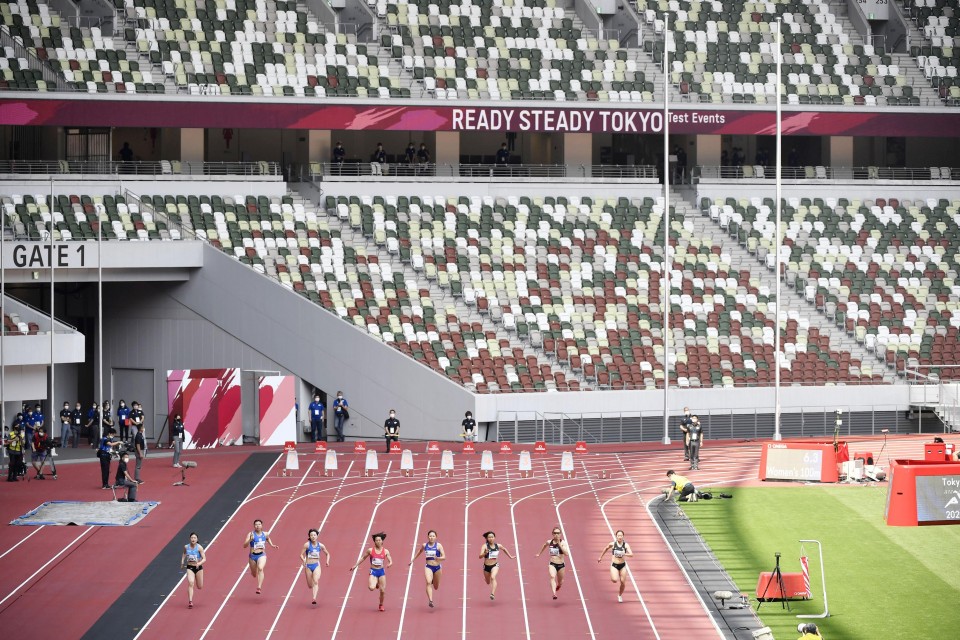 Olympics could bring more risks than economic benefits for Japan

For organizers and athletes alike, hosting the Tokyo Olympic and Paralympic Games with or without spectators can make a huge difference.

Hosting the big sporting event as part of the coronavirus pandemic, with spectators reduced to a maximum of 10,000 per venue or 50% capacity – whichever is smaller – may not in itself mean a change as well. important in economic benefits.

But some economists have raised the red flag that the economy could receive a blow, rather than a windfall, from the once postponed Olympics, depending on whether Japan can control the spread of the virus. The organizers of the games have already banned foreign spectators.

An Olympic test event for track and field takes place at an empty national stadium in Tokyo on May 9, 2021, with spectators not allowed due to the coronavirus pandemic. (Kyodo) == Kyodo

Takahide Kiuchi, executive economist at the Nomura Research Institute, estimates that the economic benefits of the Tokyo Games will be 1.72 trillion yen ($ 16 billion) when spectators are allowed at each venue within attendance limits.

The figure is 89.4 billion yen lower, a drop of 4.9%, from the estimated 1.81 trillion yen windfall that a full-scale Olympics would bring to the Japanese economy.

Japanese Prime Minister Yoshihide Suga bases his hopes for success on the positive effects of what will be the second Summer Olympics Tokyo has hosted, after the first in 1964.

But Suga hasn’t ruled out the possibility of switching to spectatorless games for safety and security reasons if he decides to declare another COVID-19 state of emergency.

In this scenario, the economic benefits would decline to 1.66 trillion yen, or 91.9% of what large-scale gaming would generate, according to Kiuchi, who considers such a loss “not significant.”

Japan has already reaped economic benefits before hosting the games, building the necessary infrastructure such as competition venues and accommodation facilities for athletes and others involved.

After three declarations of a state of emergency since last year, the Japanese economy faces the risk of another quarter of negative growth in the April-June period.

The Daiwa Research Institute estimates the economic payoffs during the games at 520 billion yen. Of the total, 70 billion yen would come from spending by Olympic and Paralympic participants and spectators, and 150 billion yen from households.

A quasi-state of emergency is in place in 10 prefectures in total, including Tokyo where there are 24 Olympic competition venues.

In the capital, people are now allowed to drink alcohol alone or in pairs for up to 90 minutes between 11 a.m. and 7 p.m. in restaurants and bars. But he has already seen signs of a rebound in coronavirus cases since the stricter state of emergency ended on June 20 after about two months.

The near-emergency declaration is expected to end on July 11 under the current plan, ahead of the Olympics opening ceremony on July 23.

Toru Suehiro, senior economist at Daiwa Securities Co., said tighter restrictions, such as limiting the movement of people, could remain due to the Olympics and Paralympics between August and September.

“We can expect a negative impact of 300 to 400 billion yen on consumption during the July-September quarter, compared to the scenario in which there would be no Olympics,” Suehiro said.

Foodservice establishments serving alcohol are unlikely to enjoy the same benefits that the Olympics bring in normal times. The same is true for corporate sponsors.

Alcohol – one of the must-have items for some spectators – will be banned at venues this time around. Alcoholic beverages will not be sold or allowed to be brought in, according to organizers.

This is a setback for sponsor Asahi Breweries Ltd., even though it supported organizers’ decision to ban the sale of alcoholic beverages as a “natural” outcome amid the pandemic.

Under the influence of the liger pandemic, Japanese brewers have sought to meet the demand for home drinks.

Asahi, for her part, launched a subscription service for beer servers and a successful “Super Dry” canned beer that, like a draft beer, creates a head when the top of the can is removed.

The demand from Olympic and Paralympic fans and home spectators can, to some extent, help alleviate the pain experienced by companies in the alcoholic beverage industry.

“The Olympics are certainly an opportunity to market beer and other alcoholic beverages, but that depends a lot on (the spread) of the coronavirus,” a beer industry official said.

“First of all, the amount of alcohol people drink at home is markedly different from how much people drink in groups outside,” said the official, who wished to remain anonymous.

Any rebound in COVID-19 cases during and after the Olympics would be a negative factor for the Japanese economy, despite economists predicting that “pent-up” demand will reappear once people are vaccinated.

“If Mr. Suga is to have a ‘safe and secure’ Olympics, no spectator should be the best option,” said Suehiro of Daiwa Securities, noting that further spread of the virus due to the games continuing will hurt the economy. .

Suga will face a moment of truth with an election to the lower house due to take place this fall.

“It is true that there are different options, including whether or not to organize the games and whether or not to allow spectators to enter. But without canceling the games, we want to make them safe and secure for spectators and all. world, ”said Hidemasa Nakamura, the organizing committee’s game delivery manager.

“I have to take responsibility myself if there is a sharp increase in infections,” he told a TV show at the end of June.

Remember the past, but don’t be captivated by it