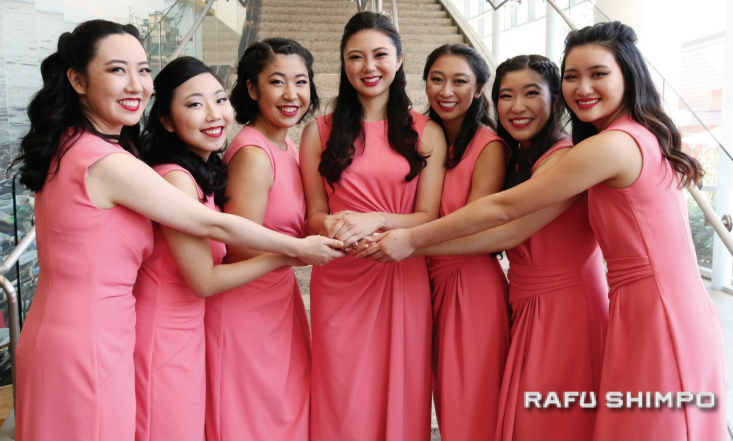 By GWEN MURANAKA, Editor of Rafu

Once again, dancers will fill First Street and a Nisei Queen of the Week will be crowned in front of an audience at the Aratani Theatre. After a two-year pandemic hiatus, Nisei Week announced it would return to in-person events at an opening ceremony held at the Japanese American National Museum on Sunday.

Centenary United Methodist Church-based Chikara Daiko performed to kick off the ceremony. Co-Chairs Cory Hayashi and Nancy Okubo welcomed over 100 guests. Since 2020, the festival has been held virtually and although the pandemic is not over, Nisei Week, the longest running ethnic festival in the United States, will resume as an in-person event.

“For the past two years, we have made the difficult decision not to hold an in-person Nisei Week festival,” Hayashi said. “It was only the second time in our long history that we had to do this. The first was during the dark times of World War II. Similar to that time, the Little Tokyo community has shown their determination to come together to care for each other and our community.

Ann Burroughs, president and CEO of JANM, said the return after two years of virtual ceremonies is a testament to the resilience of the Japanese-American community.

“It’s wonderful to think that we will all be celebrating the…rich cultural life of this precious community and just the sheer joy of being able to be together again and celebrate the extraordinary resilience of this community…who have come out stronger than they were. was previously in the second time in its history,” Burroughs said.

Nisei Week Court 2022 made its official debut in fuschia pink dresses designed by Tadashi. The coronation will take place on Sunday, August 13 at the Aratani Theater.

“Thank you again to the five amazing women I have had the privilege of spending the last year with. We have been through so much together on last year’s journey which has brought us closer together and given us a connection. for life,” Hasama said.

Choreographer Azuma Kikusue and her dancers presented the dances that will be performed for the Grand Parade: Hiroshima’s “One Wish” and “Kawachi Otoko Bushi”, a festival standard. She currently teaches over 60 students from Ventura, Los Angeles and Orange counties and 15 students from Kapa’a and Lihu’e, Kaua’i.

Kikusue said this year’s dances were favorites of the late Azuma Sumako, who passed away in 2020.

“As many of you know, our head sensei Azuma Sumako passed away after a courageous 24-year battle with brain cancer. We have chosen this year’s parade dances ‘Kawachi Otoko Bushi’ and ‘One Wish’ because they are two of his favorite choreographies. We thank the Nisei Week Committee for allowing us to honor him in this way and for asking us to perform here today,” said Kikusue.

The traditional kagami-biraki or sake barrel breaking ceremony took place at the end.

Talk to Rafou, co-chairs Hayashi and Okubo said they were both anxious and excited to see Nisei Week resume as an in-person event. Over the past two years, Nisei Week has seen a new generation of volunteers and has had to adapt.

This year, instead of the gyoza contest, Day-Lee Foods is sponsoring a Nisei Week Matsuri that will feature local chefs and cooking demonstrations. They both said that the most exciting aspect is seeing people again.

“We all got used to Nisei Week as a homecoming. You see some people at this event,” Okubo said. “It’s been a while since we’ve had this homecoming. Doing something together in person is going to be a highlight for a lot of people.

“Seeing everyone again is the greatest excitement. See the parade go down the street, dance together on First Street, be there for all our winners, hang out in the beer garden and get our local food. Coming to Little Tokyo and seeing the energy of Little Tokyo is something we all miss,” Hayashi said.