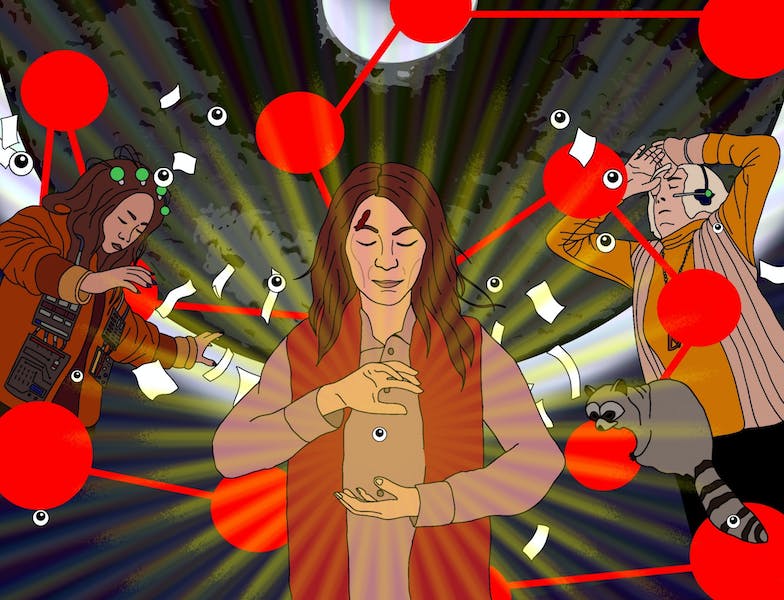 Movie Review: All About “Everything, Everywhere, All At Once”

The multiverse seems like something people love these days.

You’ve seen it in Into the Spider-Verse and Spiderman: No Way Home. You see it in “Dr. Strange in the Multiverse of Madness. The Multiverse is just part of an ongoing fascination with questions about the world around us.

This is the case of Evelyn Wong, played by Michelle Yeoh. Evelyn tries to run the family laundry, appease her father, tell her husband what to do, and organize a community meeting while navigating her daughter’s coming out. On top of that, she has to file her taxes! (I’ve personally been a victim of the IRS before and found out the hard way how many forms I have to fill out). No one wants to be in the situation Evelyn finds herself in, and we all have a feeling she doesn’t either.

But, in “Everything, Everywhere, All At Once,” fate has no mercy on her, and Evelyn is soon given a new responsibility: to save the multiverse from an omniversal entity by jumping to alternate realities to learn different skills. . Suddenly, she alternates between a timeline in which she is a martial arts movie star, one in which she is a hibachi leader, and the current, most disappointing reality: one in which she is fighting for her life in an IRS building.

The special effects take the audience on a ride with these characters. As Evelyn travels through space and time, she unmistakably begins to answer the questions she was trying to avoid: Does she really love her husband as he is? Why is she so unhappy?

“Everything, everywhere, all at once” is what happens when you gather all the threads of life, wrap them in a ball of yarn and knit something with it. It is a mosaic of different generations within the same family, of different cinematographic genres which essentially belong to the same artistic medium.

The film examines Evelyn’s roles as both a daughter and a mother, a person who has to meet expectations and a person who sets expectations for others, and connects the two to show how one influenced life. ‘other. It mixes seemingly unrelated elements into something new. Imagine fusion food, but the hit kind.

The process is funny and heartbreaking, where the audience goes from laughing at one scene to crying at the next. Daniel Kwan and Daniel Scheinert, the directing duo also behind ‘Swiss Army Man’ and ‘Turn Down For What’, didn’t leave a lost line in the script – every moment served up jokes, tension builders and, most of the time, both.

Evelyn’s useless, soft-spoken husband, Waymond Wong, played by Ke Huy Quan, was funny at first, especially as he contrasted another multiverse Waymond who could defeat officers with just a fanny pack. .

And yet, the second the light in his eyes began to dim when he heard his wife marvel at what she’s accomplished in a future where they haven’t been together? Heartbreaking. Devastating. There was only one line spoken during this scene, but it took me several hours afterwards to regain my composure. I’m crying just thinking about the film’s reflection, but maybe it’s just the allergies.

The movie gets better the more you watch it, and the closer you watch it, the better. There is something for everyone here. Only casual movie buffs will understand the timeline that references “Ratatouille,” which just took place in a Japanese restaurant and features a much bigger animal instead of Remy.

I grew up watching martial arts series adapted from Chinese fiction, so the montage of Evelyn’s Kung-Fu training and her Pinky Fury technique reminded me of when I was a little girl from 8 year old who stayed up late watching people fly around and fight and kiss once in a while. Maybe those late nights were the reason I’m not taller now, but I’d probably do the same if I went back in time.

People who have followed Yeoh’s long career would revel in the footage of his career used in the movie star timeline as much as Wong Kar-Wai’s supporters with the way the timeline was written and filmed. Quan was channeling his best Tony Leung here, and that’s huge praise.

The film’s big metaphor was the Everything Bagel, to talk about the universality of life and our fundamentally trivial existence. According to “Everything, Everywhere, All At Once,” life is one really big bagel, and people are the poppy seeds on top of that. Yet just being poppy seeds is really, really hard.

But if I had to come up with my own food metaphor for the film and the subjects it wants to address, I would choose to eat fondue. Life gets overwhelming at times, like when you’re paralyzed from choosing the many hotpot options and then anxiously tossing them into the steaming broth. Do you go with bok choy, or do you go with the mushroom? Are you sure this broth goes well with this sauce?

But there are few things I look forward to more than leaning over the pot and waiting for the beef to be cooked with people I care about, laughing at each other as the steam fog up our glasses. The ick I sometimes get goes away as soon as I realize that my friend’s first hard-earned fishballs are going to my bowl before hers.

People like to say that we really are living in the worst timeline ever. Maybe we are, just like our Evelyn, with all the power and potential she had, ended up folding and ironing clothes for a living. But if we’re poppy seeds on a bagel, at least we’re poppy seeds together. And I really like being part of this giant bagel with you.

“Everything, Everywhere, All At Once” is out in theaters now.

Share and discuss “Film Review: All About ‘Everything, Everywhere, All at Once'” on social networks.