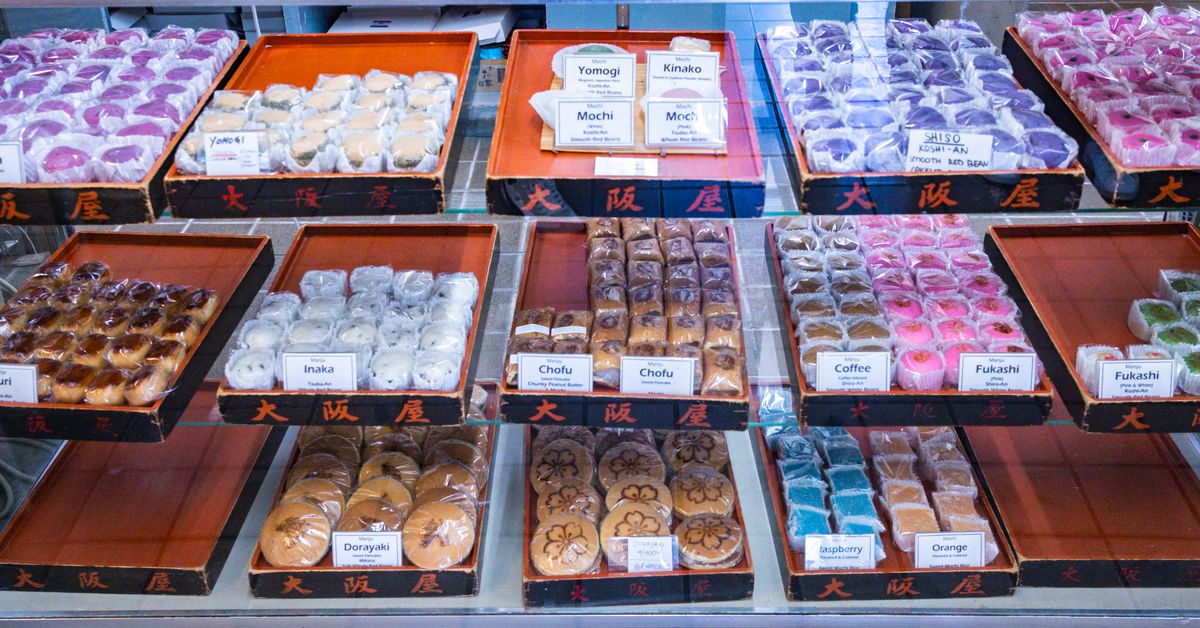 When the owners of Benkyodo, the 115-year-old mochi and manju store in the heart of San Francisco’s Japanese Quarter, announced in May 2021 that they intended to close the store and retire, the newspapers and community members denounced the impending closure as a cornerstone of the lost Japanese-American community.

“It was really where people could catch up on the latest community news, see old friends, and enjoy a cup of coffee at the burnt orange counter,” says Eryn Kimura, an old family friend of the owners who spent the last six years. months of store filming operations for a documentary. Kimura filmed owners and brothers Ricky and Bobby Okamura arriving in the mild hours of the early morning to mix, pound, steam and roll the treats by hand in the kitchen behind the store, just like their parents and grandparents previously. Kimura’s research revealed many stories going back generations: A business owner from Japantown shared that her parents met in Benkyodo in the 1950s, Kimura said. “A lot of people call it the community vine.”

The announcement of Benkyodo’s closure was followed by long lines of customers meandering down Sutter Street and eventually stretching across the entire block. The ambitious arrived as early as 11 p.m. the day before, equipped with a tent to guarantee themselves some of the Japanese confections before they sold out the next day. “There was also one night at 3 a.m. where these students were standing in line and they ran off with the most legit hot pot setup I’ve ever seen,” Kimura recalled. Benkyodo’s last day of business was March 31, and it wasn’t the only long-running Japanese confectionery store to recently close its doors. In 2021, Los Angeles’ Mikawaya, the originator of mochi ice cream available in the frozen dessert aisles of grocery stores near you, closed its physical store after 111 years of operation.

But the century-old Japanese confectionery is not extinct. Fugetsu-Do in Los Angeles turns 119 this year, and the family business has no plans to stop. Nisshodo in Honolulu just celebrated 100 years in business; Kogetsu-Do in Fresno will celebrate its 107th in September. Elsewhere in the American West, a younger but still established generation of confectioners is quietly operating: Shuei-Do Manju Shop in San Jose is nearly 70 years old and Osaka-ya Wagashi in Sacramento is nearly 60; Hogetsu Bakery in Chula Vista nearly 40 years old. Gardena, a sleepy hub of Japanese America in the southwest corner of Los Angeles County, is home to Chikara Mochi (37) and Sakuraya (62). Fujiya in Honolulu turns 70 next year.

Inside and three varieties of wagashi in Osaka-ya: a white bean kiku mochi; kinako red bean mochi with kinako powder; and a fukashi mochi, with a smooth red bean inside and a cake-like texture on the outside.

Each of these places sells mochi, manju, and other traditional palm-sized treats from Japan – collectively called wagashi. Mochi is an immensely soft, doughy confection made from sweetened rice flour mixed with water and then pounded together. In confectionery, mochi is folded with sugar and rolled around bean paste to form a round, soft ball. Mochi plays a central role in many Japanese festivities. On the largest of them – the New Year – spoonfuls of mochi are dropped into a bowl of soup. In the spring, mochi covered in cherry or oak leaves are shared for Girls’ and Children’s Day celebrations. Manju, on the other hand, is made with wheat flour, stuffed with bean paste, and then steamed. In traditional tea ceremonies, wagashi are presented with a bowl of matcha from the host to the guest.

But the centuries-old tradition of wagashi has developed its own roots in America in flavors, shapes and customs unheard of in contemporary Japan. In Hawaii, platters of mochi are offered as wedding favors, and butter mochi — rice flour combined with butter, coconut milk, eggs, and sugar, then baked — reigns supreme at potlucks. . The milk-infused chichi dango is also available for spring celebrations. Fruit-flavored square mochi is a common sight in American confectioneries.

Linda Nakatani, the owner of Osaka-ya in Sacramento, took over operations of the store her parents opened in 1963. She sells traditional confections, but “the younger generation doesn’t care about beans as much,” she says , “so we have mochi filled with peanut butter, chocolate ganache. Osaka-ya also sells sushi, rice balls, spam musubi and, during the harsh Sacramento summers, uses the shaved ice machine, dotting snow cones with homemade syrups and condensed milk.

Stores, like their wares, are generally small and timeless. A glass showcase or two lacquered tray displays containing neat rows of mochi and manju. Behind the counter or across the room, there may be shelves crowded with Japanese sweets, crackers, and figurines. On the counter might be boxes of prepackaged tea or mochi, in the corner might be an ice cream or cold drink fridge or a hibernating shaved ice machine, and most often a door in the back that leads to the mysteries of the kitchen.

Lynn Ikeda is the 107-year-old third-generation owner of Kogetsu-Do in Fresno’s Chinatown. His grandparents were among 120,000 Japanese Americans forced by the US government from their homes and businesses during World War II to remote prison camps across the country. During the internment, his grandparents rented their business and the building to Chinese neighbors, thus avoiding the loss of possessions which affected many others.

Her grandfather, Ikeda says, continued to make mochi even in the camps. “He made everyone leave the kitchen so he could keep the recipe,” Ikeda says. The recipe remains a family secret to this day.

Ikeda’s family was not alone in resisting attacks on the Japanese community and its businesses. In San Francisco alone, there have been “three, now four, waves of forced eviction: Victorian-era exclusion laws, World War II incarceration, 1960s redevelopment, and the hyper-gentrification of the 2010s,” Kimura points out. Ikeda and Nakatani credit the dedication of their immediate communities and the desire of customers to pass on traditions through their families, which has kept their businesses going. “Customers are very important to me,” says Ikeda. “For me, they are the heart of the business.” Then there was the pandemic. At the height of the COVID-19 shutdowns, Nakatani said she had to lay off all her employees except her two sons. She was throwing away at least 500 pieces of mochi and manju a day.

While business is better these days, it’s still grueling work to run a small food business that relies on physical craftsmanship. Making mochi can be a multi-day affair; the rice soaks for eight hours before being cooked in a process where the water must be constantly changed. Nakatani says she can easily squeeze 18 hours into her busiest days. Her son once spent 36 hours straight, stealing hour-long naps from the back of the store.

“Having a manju shop takes a lot of work and time. It really has to come from the heart,” says Ikeda.

The community seems to be the key to the long life of the wagashi store. Wagashi can be beautiful – colorful, jewel-like, flower- or fruit-shaped – or spectacularly modest, rolled in soy powder or eaten plain, capable of being swallowed in two bites. But a platter of mochi and manju most often comes at breaks in time when the good things in life happen: a small party, a reunion with family or friends. It has the brands true to all the greatest foods – handmade, delicious, traditional without being exclusive, endlessly adaptable and full of memories. It’s hard not to see why it’s passed down from the old to the new.

“I tell my kids, if something happens to me and I die, forget about my funeral, just make sure you fill customer orders,” she laughs. “I know it’s morbid, but I don’t want to ruin their vacation.”

Ikeda also has no plans to retire just yet. “I just plan to do this for as long as I can, as long as I have my health.”

Kimura acknowledges Benkyodo’s bittersweet loss with gratitude for the Okamuras. “Back then, they were open seven days a week, getting up at 2 a.m. to start making manju until about 4 p.m. Imagine,” she said. “I am so happy that they can rest, spend time with their family and grandchildren, sleep and revel in the fact that they are indeed their grandparents’ wildest dreams.”

For now, in the old and the new, the dream continues.

The freshest news from the world of food every day