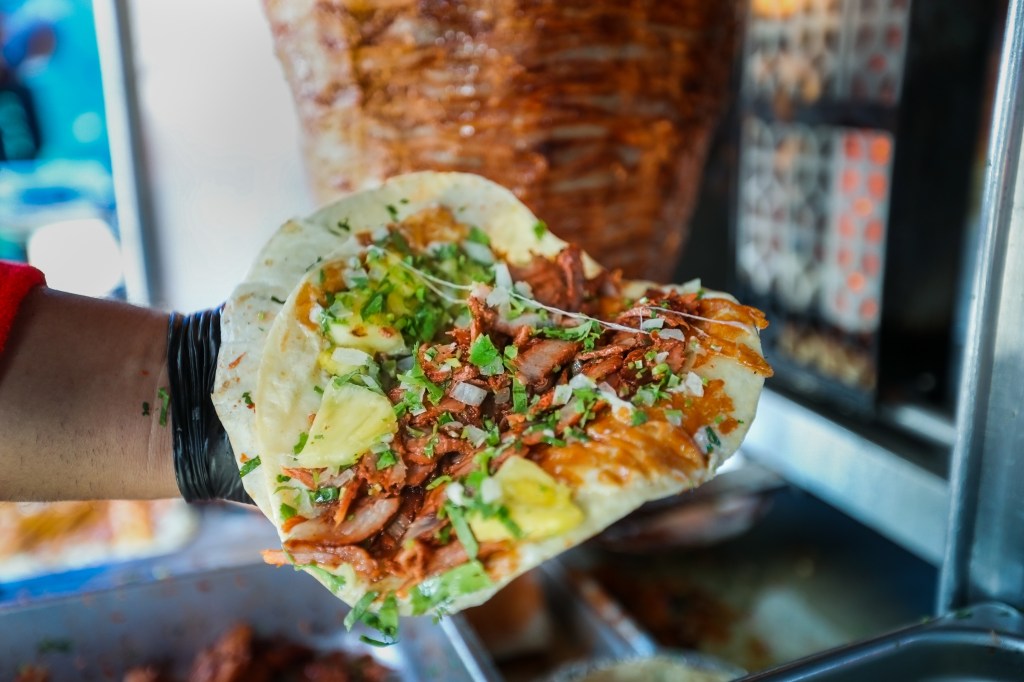 Is the best Mexican food in Oakland hidden along the Coliseum Way hallway?

On a recent Saturday morning, Alberto Eugenio Fabian of Tacos Al Pastor, a sidewalk eatery on Oakland’s Coliseum Way, shaves tender slices of scarlet red pork from a trombone or flamboyant pineapple spit. The taquero carves a slice of caramelized fruit, which drips with juice as it lands on the tender meat, and adds dollops of cilantro, onions and fresh pineapple.

These family-made tacos—authentic, al pastor style from Mexico City—are hard to find in the Bay Area, even here in taqueria-filled Oakland. But you can score them and a plethora of other Latin American dishes, from gorditas to Venezuelan arepas and handmade aguas frescas, on this narrow hallway along Interstate 880, not far from the flea market. from Oakland.

The Fabians – Alberto and his brothers, Raul and Hector, co-owners of Al Pastor Tacos – are just a few of the many vendors who set up stalls on weekends along this industrial strip. It is particularly lively on Sundays, when you can spot strolling musicians or dancing couples. Cars are often double-parked, and up to 20 vendors fill the sidewalks.

This family atmosphere is what attracted the brothers, who started Tacos Al Pastor about two years ago. Raul and Hector, who were working at a Japanese restaurant at the time, set up their trombone with 60 pounds of pork which they marinate in more than 20 herbs and spices, including ruby ​​red guajillo peppers that give al pastor its signature color. . They brought a table and some chairs. And they sold out 500 tacos within hours, with many customers still queuing.

“The following weekend we added more meat and brought in more family members to help us out,” Raul says, in Spanish. Today, with their growing team, the Fabians prepare nearly 1,000 tacos al pastor a day. And that doesn’t include quesadilla-style gringas, which are larger and stuffed in flour tortillas with cheese. Gringas are $7; tacos are $3.50.

Assembling a trombone is complicated, says Raul, and requires meticulous layering of the most tender cuts. When done well and constantly monitored, the butterfat flows, is blown away by the flame, and chars the meat, giving that ethereal, almost crunchy texture.

Keep an eye out for Tacos Al Pastor, which plans to open a brick-and-mortar location in Oakland this year. In the meantime, here are three other remarkable spots we discovered on Coliseum Way.

You can smell Ernesto Torres’ Jalisco-style smoky pollos al carbon — and occasionally hear the DJ spinning — more than a block from this large corner lot at 50th Avenue and the Coliseum Way. Torres and his wife, co-owner Rosa Ruvalcaba, arrive early, around 10 a.m., to set up their massive portable grill and tend to butterfly whole chickens over hot coals. It’s a 26-year-old family recipe, with a homemade marinade.

The chicken ($10-$34), served quartered, half or whole, comes with rice, simmered pinto beans, two salsas and a habanero curtido made with cucumbers and onions. Don’t miss the tortillas handmade by Paola Tibular of El Pollo Alegre, who cooks them on the flat grill until they puff to perfection. On a busy day, she’ll spend about 130 pounds of masa to make 1,000 tortillas. Look for the stand from 11 a.m. to 4:30 p.m. Friday through Sunday.

You’ll find plenty of homemade horchata and agua fresca on Coliseum Way. But Jose Ponce is the only vendor selling tejuíno, a cold-fermented corn drink. The drink, popular in Jalisco and Chihuahua, is made from fresh corn batter, the same used for tamales, plus water and piloncillo, an unprocessed cane sugar.

Ponce, who comes from Puebla, Mexico, stores the yellowish-brown elixir in a large cooler filled with ice and serves it in two sizes ($7 to $10) with the juice of half a lime and a garnish of nieve de limón, or lime sorbet. A pinch of tajin gives this otherwise very sweet drink a lip-smacking freshness, just like the meltiness of the sorbet. He also offers a selection of ice cream flavors from his van, which is usually parked near El Pollo Alegre at 50th Avenue and Coliseum Way.

A dozen terracotta-colored cazeulas line the long street-side restaurant where Ana Herrera and Eduardo Gonzalez simmer their steaming chicharron prensado. You can order it stuffed into gorditas, quesadillas, or tacos using tortillas hand-pressed to order and grilled on a silver cazo, a round flat-top grill imported from Mexico.

The couple, who live in Oakland, took over Las Cazuelas from Herrera’s mother when she moved to Texas to open a brick and mortar business. The restaurant called this hallway home for about five years. Gonzalez and Herrera say they like the family atmosphere and the regulars, but hope to launch a mobile truck in the future, and one day a permanent restaurant. The restaurant is usually open 8 a.m. to 5:30 p.m. Saturday and until 5 p.m. Sunday at 745 50th Ave., across from Westside Building Material.

For more food and drink
follow us on Flipboard.

Will a Metaverse cricket league take off?