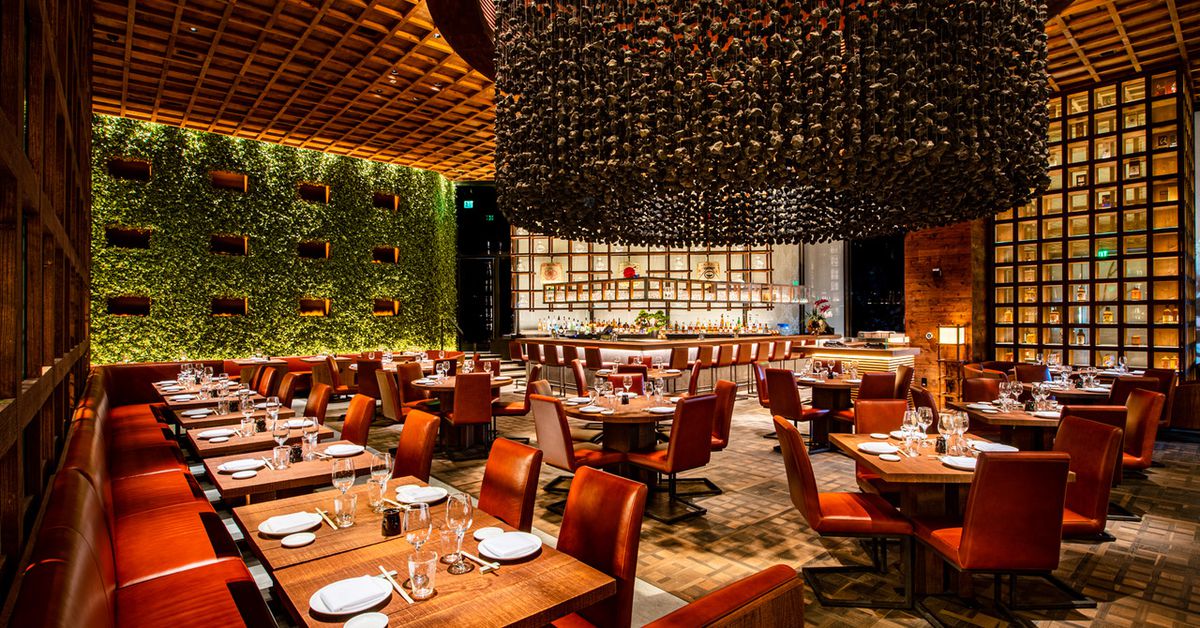 This invisible touch is just a droplet in a sea of ​​detail that makes Midtown Center’s modern Japanese izakaya unlike anything DC has seen before (1100 15th Street NW). The global hotel group behind the 155-seater stunner, which debuts for dinner service at 5pm tonight, knows what it’s doing. Shōtō is the newest member of London restaurateur Arjun Waney’s collective of brands that includes Zuma, an upmarket sushi and izakaya concept with 18 locations around the world. The highly anticipated sibling three years in the making brings to downtown DC a symmetrically pleasing Japanese robata sushi counter, bar and grill that cooks an array of fish, meats, kebabs, poultry and produce on pressed Japanese white oak (scroll down for a first look at its finalized menu).

“We built this project specifically for DC It’s unique and there’s only one,” says managing partner Arman Naqi, a DC native who has spent the past eight years in Miami working for the company.

Shōtō’s smoky grilling technique inspires perhaps the greatest show in museum-quality dining. A massive UFO-like formation hovering above diners is made of lava rock quarried from an active volcano in Japan. The stones have been drilled into orange-sized pieces, painstakingly threaded by hand, and now hang in a perfect circular formation from the 25-foot ceiling. At sunset, the backlit, floating sculpture offers seated diners a dazzling spectacle of shadows on the floor while a DJ spins “pulsing” music nearby on the weekends.

The dramatic black centerpiece joins an array of sets also purchased, assembled and/or salvaged in Japan that have made the amazing 7,000 mile journey to DC in one piece.

Customers have a tangible idea of ​​what’s in store as soon as they open the door. The long, slender handle is a tan branch that once belonged to a tree growing in an ancient Japanese forest, hand-picked by Muramatsu just for Shōtō. Illuminated bottles of Japanese whiskey greet guests at the entrance, presented as precious artifacts behind gold metal grilles. Shōtō is shooting to have one of the largest selections of Japanese whiskey in DC, if not the East Coast. For now, you have 40 rare types to choose from with the goal of reaching 100 as supply restrictions ease.

Shōtō, which means “short sword” in Japanese, speaks to “our commitment to accuracy and precision,” says Naqi – from his skills in cutting raw fish to every design element that seems to have a place and a place. goal. The sushi counter, for example, gives diners a direct vantage point to watch the meticulous knife work on amberjack, O toro fatty tuna, A5 wagyu and other delicacies from Japan. Executive sushi chef Kwang Kim and executive chef Alessio Conti, both restaurant group veterans, are opening with omakase menus (from $95 per person) and a la carte options.

The walls and ceiling themselves are a mathematical feat, made up of square wooden boxes that cast a grid-like look around the room. Other elements are as functional as they are fabulous to look at.

Century-old parts of a working aqueduct system in rural Japan are reincarnated as flowerpots to hold Japan’s beloved cherry blossoms. Rows of mouth-blown glass bowls, designed to look like traditional Japanese tea kettles, rest on shelves above the bar. Soon they will be filled with Japanese spirits, sake and shochu infused with fresh fruits, herbs and vegetables. “Every day, week and month there will be different infusions for our customers to try,” says Naqi.

The glass orbs are interspersed with gigantic barrels of sake from Japanese breweries. Now the empty, flexible containers sit like floating ivory works of art at the bar, where floor-to-ceiling windows help create an “exposure factor” from the street, says Naqi. A hand-carved ice station joins a bonsai tree behind the bar, where signature cocktails are made with only Japanese spirits (vodka, gin, whiskey, sake, sparkling sake).

A wine and sake cellar that holds up to 1,500 bottles takes up an entire wall, and patrons can watch sommeliers climb a ladder to retrieve their picks. “It adds to the theatricality,” says Naqi.

A private dining area aft brings DC a 45-seat long rectangular table under a corrugated red fabric ceiling and can accommodate additional seating if needed. Diners in the hidden room can catch a glimpse of the action through the glass cellar.

“There is no bad place in the restaurant. No matter where you sit, you discover all facets,” says Naqi.