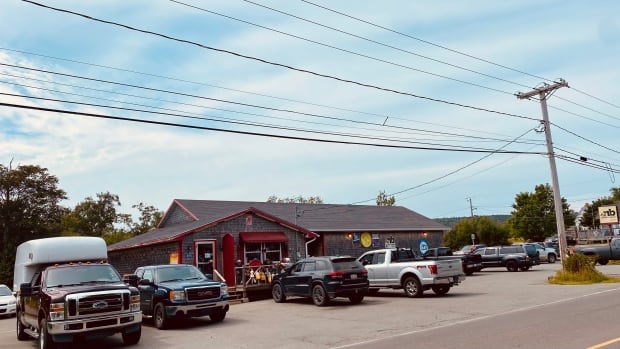 The contract to operate Grand Manan’s sole liquor outlet has been withdrawn from Castalia Convenience and awarded to Ahmet’s Independent Grocer.

The move surprised and upset many locals and sparked a lot of talk on the island.

Castalia Convenience owners Faye and Roger Guptill declined to comment, but their daughter said the family was “heartbroken”.

“It’s really heartbreaking because my parents have worked so hard their whole lives to invest in this business, to serve this community,” Courtney Guptill said.

“And they’ve done a really good job, and to have that taken away from them by a bigger company – and that was quite unexpected – it’s really upsetting, really hurtful.”

The Guptills have operated the convenience store on Route 776 for 18 years, and for 12 years they have had the only agency store on the island for NB Liquor. Their contract due to expire at the end of November, they applied again.

But on Wednesday, they discovered they hadn’t succeeded. The contract had been awarded to the only grocery store on the island.

CBC News left a message for Ahmet Tahan with an employee of Ahmet’s Independent Grocer, a chain of stores, Friday afternoon, but there was no response.

Stores under the name “Independent Grocer” are part of Loblaw Companies Ltd.

Like other grocery stores, including smaller stores, in New Brunswick, Castalia Convenience could have sold beer and wine through its existing operations. That’s what bothers Courtney Guptill the most.

“They didn’t need to take my parents’ things,” she said by phone Friday. “They were able to sell these things without hurting them or taking anything from them.”

Guptill isn’t sure her parents’ store will survive. She said alcohol was a major draw for customers.

“It really brings people into the store…and they also buy their snacks, ice cream, cigarettes and other things when they’re there,” she said.

“So when they lose the contract…they’ll lose all that business.”

When his parents got the contract a dozen years ago, they invested a lot of money to expand the store and install coolers.

“It was a very big business that they took on, and they certainly didn’t expect it to be something that they would only be able to do for a short time.”

Guptill isn’t sure what can be done to reverse the decision, but she said her family will “fight on.”

While the decision to award the contract to a larger company just down the street is daunting, the Guptills are heartened by the outpouring of community support.

A Facebook message posted by Guptill on Thursday contained more than 100 messages of support within hours.

“It’s so heartbreaking,” she said. “It’s a big part of my family. My parents have worked so hard to make this business work and make it what it is. To see that lost to a bigger business that is already thriving and has in kind of monopolizing a lot of the business on the island, it’s just heartbreaking.”

Business owner Kiera Dall’Osto is one of many to speak out in support of the Guptills – and given the choice, she would boycott the agency’s new store. But her business, Old Well House Cafe, is licensed, and she has no choice on the island but to buy from the licensed outlet.

“It forces me to participate in this,” she said.

She feels bad for the Guptills. She said they had “done everything right for 12 years”, only to have the contract taken away through no fault of their own.

Dall’Osto also worries about the decision to put alcohol in the island’s only grocery store, making it easily accessible and almost impossible to avoid.

She said Grand Manan has a “very well-known addiction problem” and she fears that putting alcohol in the grocery store could create a “trigger” for people who have had alcohol problems in the past.

“How do you avoid going to the only grocery store on the island? You can’t,” she said.

“It seems really irresponsible on an island with our population already struggling with mental health and addiction issues.”

Not the first time

This is not the first time that an existing NB Liquor agency store operator has had its contract transferred to a competitor.

Last year, NB Liquor moved its outlet in Hartland from a location near the famous covered bridge to an Irving station on the outskirts of town. The decision sparked controversy in the community and raised questions about whether politics, corporate influence or both played a role in the move.

Last minute appeals to the province failed and the change took place.

Marie-Andrée Bolduc, director of communications for NB Liquor, said contracts are put out to tender when existing agreements come to an end.

She said the process follows “an unbiased and prescribed RFP process,” and each applicant is awarded points for criteria such as:

Bolduc was asked to clarify if existing policyholders are given special consideration. In an email, she wrote: “In order to be fair to all bidders, once the evaluation has begun, all bidders are evaluated on the same criteria.”

“Kerala CM supports all illegal terrorist activity for the benefit of her daughter”: Swapna Suresh