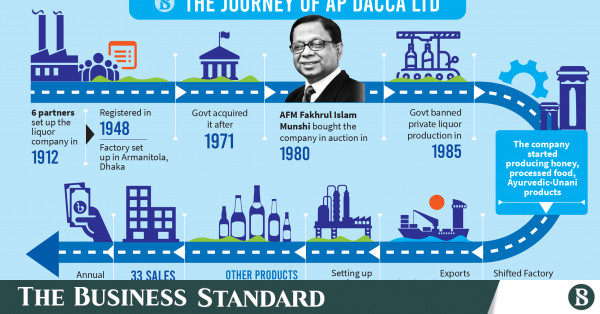 Having started as an alcohol production company more than 100 years ago, then transformed into a manufacturer of honey and herbal medicines in the mid-1980s, Ayurvedia Pharmacy (Dacca) Ltd now plans to expand its activities by exporting Ayurvedic and Unani products.

But in 1985, when the government banned the production of alcohol for private companies, the company left the alcohol business and started producing honey, processed foods, cosmetics and herbal medicines.

Currently, the company mainly focuses on the production of honey to global standards which it also exports, and for this it has set up a dedicated factory.

AP officials claimed it was the only company in the country with a dedicated honey factory.

The company is also delighted with the establishment of new factories which will inaugurate a new phase in its century-old history.

AKM Reazul Karim, AP’s chief executive and senior executive, told The Business Standard, “AP has gained huge popularity across the country as an alcohol brand. Although it no longer produces alcohol, it has maintained this popularity among customers with its diverse herbs. some products.”

According to sources, the original owners of the company registered it as an alcohol producer in 1948 after the partition of India. But, detailed information about them could not be known.

The government of Bangladesh acquired the company in the early 1970s as the original owners did not return after the war of liberation.

In 1980, AFM Fakhrul Islam Munshi, then chief administrative officer of the company, together with his partner GolamFaruk, purchased it through an open auction.

AKM ReazulHasan said that after the change of ownership, the company was only able to handle the liquor business for a few years, as the government banned the production of liquor by private companies in 1985. “As a result, the new owners were forced to introduce other products to run the business.”

AFM Fakhrul Islam Munshi introduced herbal products to run the business as he already had an Ayurvedic medicine business when he was a civil servant. He had a store in Dhaka named Sheba Pharmacy which he closed after buying AP.

However, he did not change the name of the company as it gained considerable brand value in the country.

He also became involved in politics and became an MP for the Jatiya party in 1986 and 1988. He became a deputy minister during this period. Currently, he is involved in the ruling Awami League.

In 2000, Fakhrul Islam bought out all of his partner’s shares and became the sole owner of AP. He split the shares of the company among his family members in 2003.

Currently, his eldest son Raquib Mohammad Fakhrul is the managing director of the company.

The ban on alcohol production imposed by the government could not stop the activities of AP Dacca Ltd as its new products, including honey and herbal medicines, soon gained popularity among clients.

Also, the owner of the company established Nur-Majid Ayurvedic College in Banasree, Dhaka in 1980 to create skilled manpower for Ayurvedic and Unani businesses.

Graduates of Nur-Majid Ayurvedic College work as Kaviraj (herbal medicine experts) for the company. Most of them join the company after leaving this college.

AKM ReazulHasan, Executive Director of AP, said, “Currently, our main business is honey. We export 80% of the honey processed in our factory, i.e. approximately 350 tonnes per year. All this exported honey goes to Japan. We sell the rest of the product on the local market.”

“We have 33 sales centers across the country where we sell Ayurvedic and Unani products. Our food products are sold through resellers,” he said.

The company sources its honey from beekeepers across the country. For this, the company provides them with the necessary training and financing. At present, more than 2,000 beekeepers in different areas of the country are working for AP.

AP collects approximately 80% of its honey from these beekeeping operations.

AKM Reazul Hasan said, “We cannot collect honey from Sundarbans because it is much more expensive. Most of our honey comes from mustard flowers. Some also comes from lychee flowers. However, foreigners do not inspect the flower when buying honey, they want to be assured of the quality of the product.”

According to the company, its annual sale is around Tk20 crore and it has never conceded a loss except during the pandemic period.

The company is currently setting up Ayurvedic and Unani product factories in Gazipur as per World Health Organization (WHO) guidelines with an initial investment of Tk10-12 crore.

However, that investment will gradually increase, officials said.

AKM Reazul Hasan said, “Ayurvedic and Unani methods are traditionally used in the subcontinent for health benefits. They have been proven to be safe. India already exports these types of products.

“AP has a good reputation in the market. Initiatives have been taken to expand our business. We are modernizing our factories step by step,” he added.