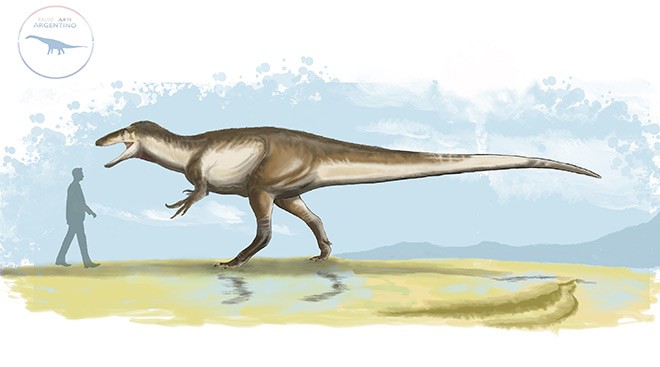 ‘Evil’ dinosaur at top of food chain discovered in Argentina

An international research team has identified a new species of dinosaur in Argentina, an apex predator so ferocious it was named after an evil spirit from a local myth.

Maip macrothorax, the largest Megaraptora relative found to date, was discovered through bones of its spine and ribs unearthed from a stratum formed 70 million years ago in present-day Santa Cruz province. , in southern Argentina, in March 2020.

“Based on the discovery of Maip macrothorax, combined with other finds, it appears that Megaraptora occupied one of the top places among South American carnivores during the late Cretaceous,” said Makoto Manabe, Deputy Director of the National Museum. of nature and science in Tokyo.

Manabe and Takanobu Tsuihiji, chief researcher at the museum, participated in the study of dinosaurs.

Maip macrothorax, a theropod, was about 9 meters long and weighed 5 tons. Like other Megaraptora, the new species probably had many teeth in its elongated head as well as sharp claws on its forearms.

According to the team, “Maip” refers to an evil spirit in Patagonian lore that freezes people to death with cold winds. “Macrothorax” was used in the name to describe the beast’s large chest cavity, estimated to be 1.2 meters wide.

Manabe, Tsuihiji and Dr. Fernando Novas of the Argentine Museum of Natural Sciences concluded that the remains belonged to a previously unknown species based on the shape and density of the bones.

Megaraptora roamed the southern hemisphere at the end of the Cretaceous. It is believed that the carnivore resembled the Tyrannosaurus that dominated the northern hemisphere.

The remains of Maip macrothorax are set to be displayed at a special dinosaur exhibition scheduled for 2023 at the Japanese museum.