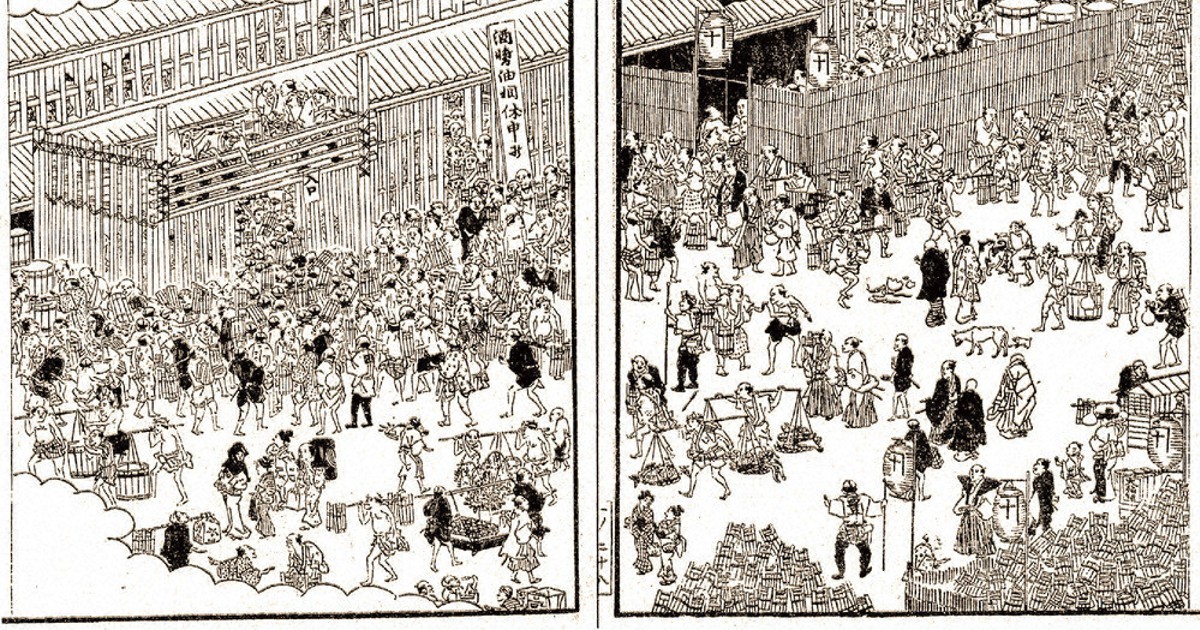 TOKYO — Below is a page from “Edo meisho zue” (Illustrations of Famous Places in Edo), which was published in the second half of the Edo period (1603-1867). It was kind of a guide back then, as the famous places in Tokyo today were presented with illustrations instead of photos.

Pictured here is a shop selling shirozake (white sake), or a sweet rice liquor that is a specialty offered during Hinamatsuri, or Girls’ Day, an annual event now celebrated in March to wish healthy growth and happiness. girls happiness. At the top right is the name of the store in Chinese kanji characters, “Toshimaya sake shop”, now in the Chiyoda district of Tokyo and known simply as Toshimaya.

Toshimaya was founded in 1596, shortly before warlord Tokugawa Ieyasu founded the Edo Shogunate. The facility, which was opened at Kamakura Waterfront, a cargo unloading site for Edo Castle, has a history of over 420 years and is Tokyo’s oldest sake shop. The traditional liquor could be seen at the store front ahead of Girls’ Day on March 3.

During the Hinamatsuri celebration, hina dolls are decorated in the houses while “hina arare” rice crackers and “hishi mochi” multi-layered rice cakes are offered next to them. Shirozake is another essential for the Girls’ Day festival.

“It’s made by keeping glutinous rice and rice malt in mirin seasoning and grinding the ingredients with a grinding wheel,” said Toshiyuki Yoshimura, 61, 16th generation chef and chairman of Toshimaya Corp. The sake shop continues to create shirozake using ingredients and methods that remain unchanged from the Edo period. The whiteness of sticky rice is left in the drink, which is soft and has a smooth texture.

According to a legend passed down to Toshimaya, the shop’s first-generation chef, Juemon, dreamed of a pair of “kamibina” consisting of a male and female doll that taught him how to create white sake. Once he tried to make the drink as he was told in the dream, he was able to create a mild white sake with a mild flavor. He later sold the drink as “shirozake”, modeling it after a type of sake containing floating peach blossoms that had been drunk in the Hinamatsuri period since the Heian period (covering roughly the end of the 8th to the 12th century). It has become a hot-selling product, as can be seen in the illustration of “Edo meisho zue”. At its peak, the store reportedly sold 1,400 72-liter barrels of shirozake, the equivalent of 56,000 modern standard 1.8-liter bottles.

“It (shirozake) was apparently not for children, but for adult women. Since there were few sweets back then, they must have liked the unique sweet flavor,” Yoshimura said.

At Toshimaya, “Edo no Kusawake Toshimaya’s Shirozake” products in 180-millimeter bottles are sold from late January to March 3 on the old Japanese calendar, which falls on April 14 on the Western calendar this year.

Even as we were talking with Yoshimura, a customer stopped by, saying she buys the drink every year. The 400-year-old tradition continues today.

During the Edo period, the store owner would have read aloud from a written statement on the first day of sales.

“In a family history unrivaled in Japan, it’s our shirozake that we’re proud of. When you take a sip, the area around your eyes takes on a cherry blossom hue and brings a springtime mood to the heart…”

Toshimaya is the only store that currently manufactures and sells significant quantities of shirozake in the country.

“It’s only part of our sales, but the Girls’ Festival is a seasonal event and shirozake has continued to be passed down through our home as a must-have item. We’re carrying on the tradition while taking pride in our work of protection of Japanese culture,” Yoshimura said.

The original Japanese article was published on February 23, 2021.

We also visited Toshimaya Shuzou in the Tokyo suburb of Higashimurayama to see how sake is made. Besides traditional shirozake and sake, Toshimaya also makes mirin, which is a sweet rice wine commonly used in Japanese cuisine. Taku Takahashi, 54, gave us a tour of the sake brewery.

In the fall, when the temperature drops, preparations for sake fermentation begin. This is because when temperatures are low, most fungi are not active and bacteria that cause ingredients to rot will not increase. “Yeast mushrooms that are active even during winter are super resilient,” commented Takahashi, who says the key to creating sake is mushrooms.

While the rice used to make Japanese sake is non-glutinous rice, glutinous rice is used in mirin, which is the base of shirozake. Steamed rice, rice malt and “shochu” spirits are mixed and fermented for about two months. The starch in sticky rice turns into sugar thanks to koji mold. The muddy fermentation mash is filtered and the golden mirin liquid is extracted. Toshimaya mirin has an alcohol content of around 13%.

“This sweetness is created by koji mold. Overseas people are surprised when they learn about this, but we don’t use sugar. The mold has high nutritional value and is good for the body,” said said Takahashi. Japan, known for its hot and humid climate, is rich in fermented foods using yeast and other fungi, including sake as well as soy sauce and miso paste.

Takahashi commented, “Also in this sake brewery, mushrooms play the main role. We workers only protect the environment by ensuring that fungi do their job comfortably.

Here too, the traditional know-how of the workers who spoke humbly about their trade is preserved.

Toshimaya, which was named after the name of the Edo region, was founded at Kamakura Waterfront in present-day Tokyo’s Chiyoda district in 1596 as a sake wholesaler handling alcoholic beverages imported from the Nada region. in present-day Hyogo Prefecture in western Japan. . He also ran an izakaya serving drinks. The store collapsed during the Great Kanto Earthquake of 1923. After the establishment was rebuilt nearby, it was burnt down in air raids in November 1944 and the sake store was moved to its location current. As the store has faced two historic disasters, unfortunately nothing remains from the Edo period, according to Yoshimura. Nevertheless, the tradition of producing shirozake has continued unceasingly.

Toshimaya is also featured as part of the Tokyo Metropolitan Government’s Edo Tokyo Kirari Project which, based on the concept of “old meets new”, profiles brands at the https://en.edotokyokirari.jp/project/food/toshimaya/

The “Enchanting Edo” series highlights Japanese traditions, craftsmanship, craft techniques and culture that are hundreds of years old. The stories offer insight into the old shops of Japan’s capital, all of which seek ways to protect long-established skills and talents while keeping them alive in modern times.

The original Japanese versions of the articles, accessible via the link under the right of the title, include phonetic characters “furigana” to facilitate the reading of all the kanji characters of the texts. The user-friendly text primarily targets elementary school children in Japan, but can also be used by non-Japanese readers learning intermediate level Japanese. We encourage all readers interested in Japanese culture, language, or both to make full use of our series.