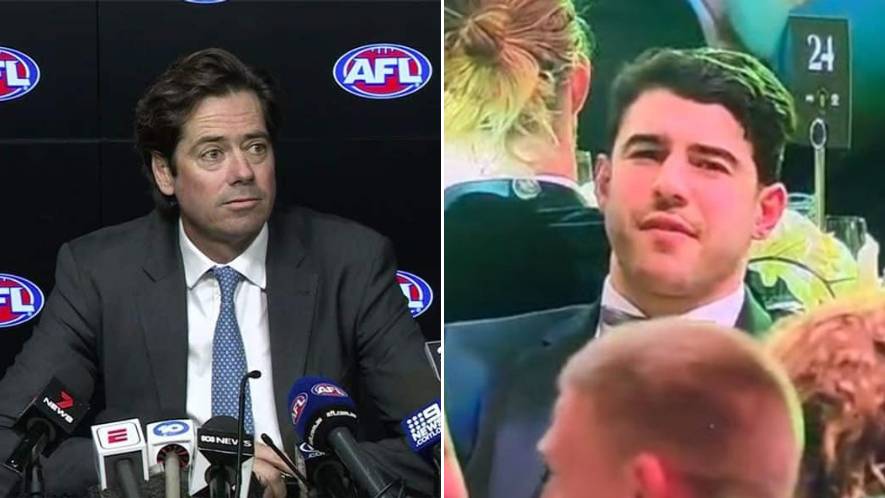 Christian Petracca looked visibly furious over the Brownlow Medal thanks to AFL CEO Gillon McLachlan’s incorrect pronunciation of his name.

Now awkward footage has surfaced on social media showing the Melbourne Demons star appearing to speak ‘for f**k’s sake’ after McLachlan repeatedly got the name wrong.

Throughout the prestigious awards night, McLachlan was pretty fluent with the majority of the pronunciation — though he couldn’t quite catch one in particular.

Despite being one of the AFL’s biggest and most popular stars, Petracca’s name was a struggle for McLachlan and the former Premiership winner was growing increasingly frustrated.

At one point while collecting votes for Round 16, McLachlan completely butchered the name once again and the camera immediately panned to a disgruntled Petracca, who appeared to say “it’s Petracca for love shit” before glancing at teammate Max Gawn.

The microphones picked up no real sound, though fans were quick to guess what he said.

A clip of the incident was posted on Twitter and it instantly exploded, with the caption reading, “Petracca frustrated with Gill’s pronunciation of his name.”

One user added: ‘Suspect Christian Petracca will want a meeting with the next AFL CEO to review the pronunciation of his surname after tonight.’

All in all, it made viewing quite awkward.

As for the Brownlows themselves, it was Carlton star Patrick Cripps who won the first gong with 29 votes in total.