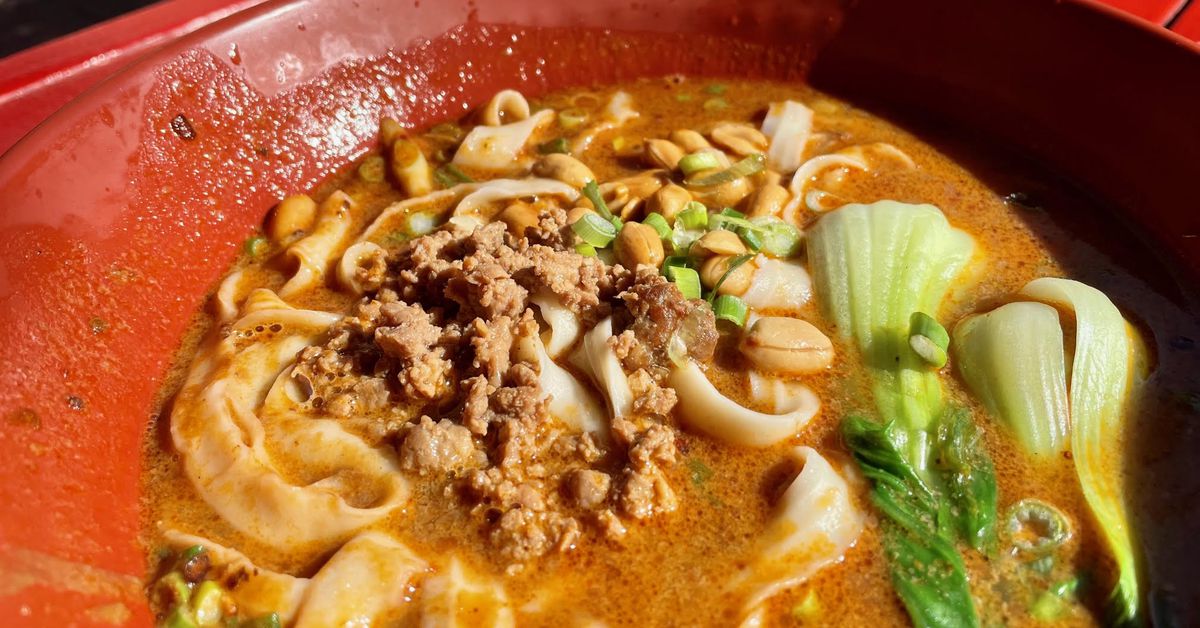 As far as Bay Area food halls go, Swan’s Market in downtown Oakland is the OG. Its roots date back to 1890, when the Oakland Free Market opened a few blocks away with produce crops and meats in a clean and hygienic environment. Today’s white tile and red brick market dates back to 1917, when it was the crown jewel of Old Oakland’s bustling shopping district. In the 1980s, people flocked to the nearby Housewives Market to buy meat, seafood and produce. But “urban renewal,” including Interstate 880 and the Convention Center, sucked life out of the neighborhood, and Swan’s closed in 1984. The East Bay Asian Local Development Corp. reopened the historic site in 2000.

Today, you can still stock up on pork sausages and fresh potatoes at Taylor’s Sausage, or grab sushi-grade salmon at family-run Sincere Seafood. But most workers and downtown residents flock to Swan’s for the eclectic array of restaurants, many run by women of color. “It’s this community of badass women of color doing their thing,” says Eman Desouky of Superjuiced. The pandemic has taken its toll, but now is a great time to visit Old Oakland and support the hardworking corps of chefs and cooks who make dishes they’re proud of.

Chef-owner Jian Huang is a third-generation Sichuan chef, so he knows spices well. The bright flavors and tang of Sichuan Pepper Broth mingle with savory ground pork, sesame, roasted peanuts and baby bok choy in hearty Chongqing street noodles. The hand-pulled noodles are silky smooth and there’s something nice about the way they give way when you bite into them. Although they are known for their noodles, the aroma of wok-cooked green beans is also very tantalizing.

The cook and her farmer

Romney Steele and her husband Steven Day have created a menu that’s a blend of their loves: seasonal organic produce from local farms like Acta Non Verba and flavors from the South. If you’re a fan of freshly shucked Tomales Bay oysters with briny reseda, you’ve come to the right place. Fried with cornmeal, these oysters are presented in a giant po’boy topped with Memphis-style coleslaw. But the highlight of the show is the Big Sur Melt, a mixture of Fontal, Gruyere and dry cheese sprinkled with prawns. Sweet shellfish are the perfect foil for the gooey, salty richness of cheese.

Owner Lila Owens says she was a successful but dissatisfied realtor when the market crashed in 2008, so she embraced her passion for baking and set about creating a moist, homey cupcake to rival what the other cupcake chains were selling. Today, she owns a thriving chain of four bakeries. Its best seller is the Red Velvet cupcake which sticks to the dessert’s southern roots. However, those who like it tart and sweet will be mesmerized by the Key Lime cupcake with its tangy lime curd center and buttery graham cracker base.

The name may sound Italian, but the phrase means “super black” in the Japanese dialect spoken by owner Chikara Ono, of B-Dama and Masabaga fame. It’s also an apt description for the delicious black curries created by slowly cooking onions, mushrooms and other vegetables in a smoky, flavorful and satisfying sauce. Pair it with an omelet, fried shrimp or pork katsu for a super hearty meal that showcases a refreshing side of Japanese flavor.

Eman Desouky opened Superjuiced in 2015, when there were few health-focused juice spots in Oakland. She led the pack with her exclusively organic, plant-based menu of bright juices, dreamy smoothies, immunity shots and filling bowls. For a change from the acai bowls, try the Mango Matcha Bowl, the Date Sweet Shop Fresh Coconut Milk and Mizuba Matcha, a woman-owned brand. Pick up a pace and while they’re making your drink; everything is made fresh, so it’s full of nutrients.

The cuisine of La Guerrera

The mother-daughter team of Ofelia Barajas and Reyna Maldonado achieved gastronomic fame with Barajas tamales sold on the street in San Francisco’s Mission District. Reyna’s father, Luis, now joins the women of Swan’s in introducing these beloved beef and guajillo pepper tamales, along with a full menu of guerrerense cuisine. Beef barbacoa is a backup option, but this coastal region also has a lighter side, seen in pescaria, crispy white fish and pico de gallo tacos drizzled with chipotle sauce. Fans will have to appease themselves with memories of mole rojo chicken and vegan posole for a while longer, as supply chain dang delayed the opening until late February or mid-March.

The Annapurna menu is filled with satisfying versions of every Indian dish Americans love, from chicken tikka masala to vegetarian samosas to lamb korma. But the owner and chef are from Nepal, so it makes sense to explore that part of the menu. Start with plump mono meatballs, then move on to chicken choila, a tender meat tossed with green peppers, cilantro, onion, plus heat and fragrant spices. Annapurna invites you to dine in, thanks to the grand proportions of the dining room, colorful transoms, imported tapestries and eye-catching Bollywood music videos.

There’s always a new taste at Sarah Kirnon’s Caribbean soul cooking spot. At a recent stop, it was slow cooked oxtails with coconut rice and peas. But you can always count on premium fried chicken that’s infused with seasoning and tender to the bone. And the golden mahogany crust is crispy and 100% gluten-free. It peaks in the Bajan Chicken Sandwich, where sweet plantains hold together pickled vegetables, coleslaw and crunchy chicken. Top off your meal with a rum punch and you’ll be fine.

Swan’s Market is one of three that Souvenir Coffee founder Jeremy Bled owns in the East Bay. They source their specialty coffees from Honduras, Ethiopia and Brazil and roast them locally. A few locations, like those in Solano and Claremont, elevate a compostable cup to the company’s Berkeley roots. Vietnamese coffee strikes the right balance between invigorating and sweet, and they do a great deal in lattes and flat whites.