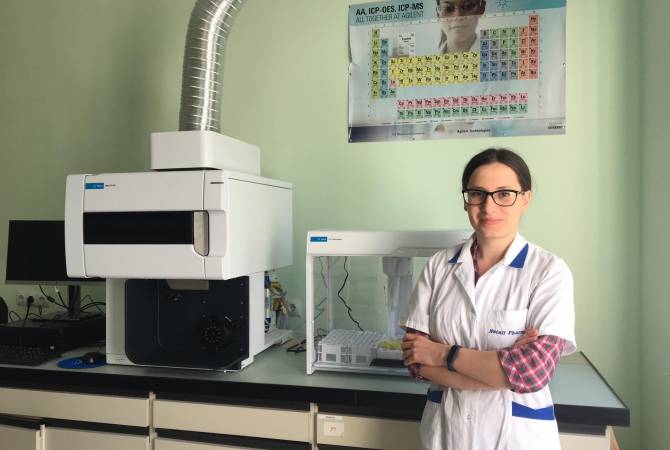 Any discovery beneficial to the good of mankind would be considered a career high for me. 10 questions to a scientist

Ella Minasyan decided to become a scientist while studying at the Department of Pharmaceutical Chemistry of the Faculty of Chemistry of Yerevan State University, when theoretical classes went hand in hand with laboratory experiments. Since 2015, Ella has been a junior researcher at the “Armbiotechnology” Scientific and Production Center of the National Academy of Sciences of Armenia. She is also engaged in the ADVANCE scholarship program of the Foundation for Armenian Science and Technology (FAST).

How did your journey as a scientist begin?

I was majoring in chemistry and biology in school, so when I had to choose a profession, the decision was made quite quickly and I applied for the department of pharmaceutical chemistry at the State University of ‘Yerevan. I was really passionate about pharmaceutical work during my university studies. I also happened to work at the pharmacy, but research has always been closer to me, so that’s what I do now. I am also a candidate for the Scientific and Production Center “Armbiotechnology”.

What motivates you to get up in the morning?

There are indeed many reasons to get up, like everyone else, but preparations for the day ahead take priority. This is what motivates me to get up in the morning, to continue the incomplete tasks with renewed vigor.

How would you describe a scientist?

It goes without saying that student conceptions are completely different, even sometimes stereotyped. Later, once you opt for this career path, they completely change. Thanks to my scientific director in the bachelor’s and master’s programs, candidate of chemical sciences Satenik Petrosyan, who is an extremely likeable person, I imagined a scientist like her, knowledgeable and intelligent but, at the same time, modest and friendly. Unfortunately, some people in our society do not know what a scientist does. I would like to see these approaches modified by role models of young scientists.

Is science as difficult as we think?

As far as I’m concerned, it’s not at all difficult. Quite the contrary, it serves as a platform for endless creativity. Science enables people to realize their potential, as well as to feel empowered through discoveries.

Would you like to highlight an important step in your decision to pursue a scientific career?

Probably our research experiences throughout my university years, which reinforced my passion for chemistry and pharmacy. My job at the pharmacy was another turning point for me to realize that wasn’t what I needed.

What discovery has marked you the most in the context of your scientific interests?

I find all the inventions interesting and crucial, they enrich the already existing knowledge, contributing to new inventions and discoveries. As a researcher, who also carries out research on the identification of various substances, I would underline the importance of technologies which allow, for example, the control and assurance of medical quality at all stages, from production to to its ingestion by the patient.

Are there any scientists you consider role models whose work has been a guideline for you?

I have studied the work of foreign scientists in the field, I am also aware of current research. As for a scientist who inspired me, I would cite Marie Curie, who was the only person to have received the Nobel Prize in two scientific fields, in physics and chemistry. The best role models for me are the Armenian scientists, who continue to work and manage to achieve results under the most difficult conditions.

What research are you currently conducting?

Using analytical equipment, we carry out qualitative and quantitative analyzes of a substance of unknown composition, to determine what elements it is composed of. It can be drugs, newly synthesized substances or plant extracts. In addition, I worked on a technology for extracting and purifying plant melanin, which mainly occurs in low-cost agricultural waste, and conducted multilateral research on the physico-chemical and biological characteristics of melanin. extracted, and the detection of its structural elements and new fields of application.

What would you recommend to a child who wants to become a scientist?

Never give up, generate exciting new ideas and do your best to make them happen in the future. I would also tell them not to be afraid of trials. As for adults, I urge them to encourage their children to pursue a career path that would benefit humanity.

What is your aspiration as a scientist?

Every scientist would surely consider the coveted Nobel Prize as the pinnacle of their career. Generally speaking, I would personally consider any beneficial and crucial invention for mankind as a career high.

Previous interviews of the “10 questions to series “a scientist” are below:

I decided to continue the family tradition of pursuing scientific studies. Karen Trchunyan

Nothing brings a person so much joy as the feeling of the reward of a scientific result. Ani Paloyan

The story of Anoxybacillus karvacharensis found in the geothermal spring of Artsakh as inspiration. Diana Ghevondian

In an American laboratory 20 years ago, I felt like I was in a Hollywood movie. Anna Poladian

Science excels in all trades because it is perspective: Sargis Aghayan

The easiest way to change the world is to do science: Sona Hunanyan