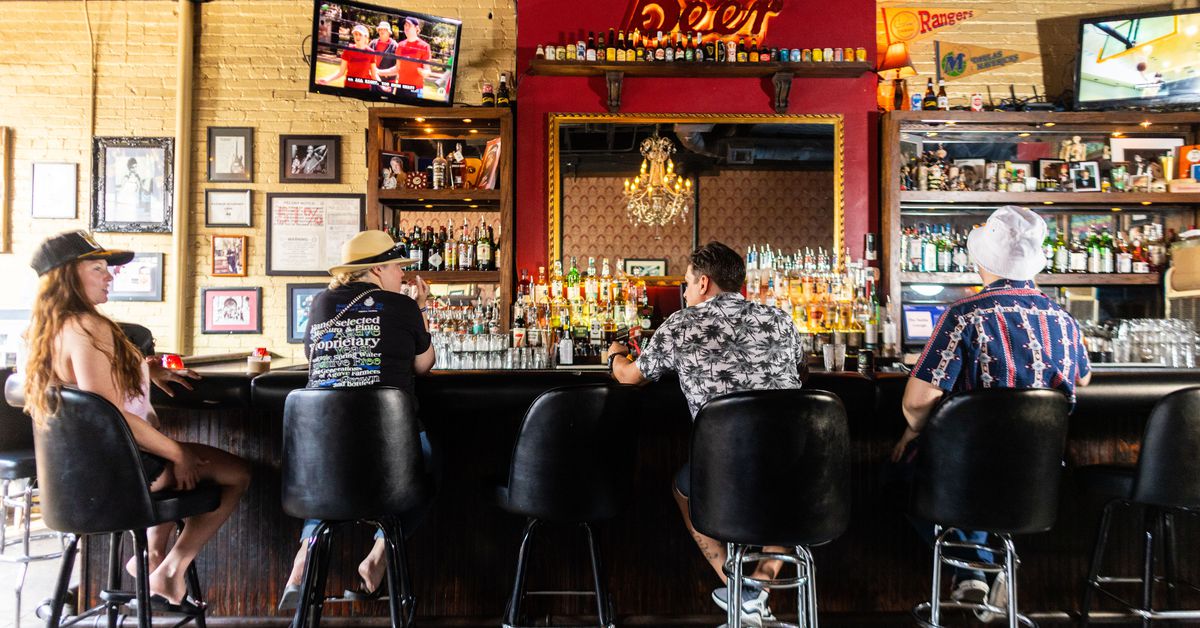 Deep Ellum has seen its fair share of places come and go since its heyday as the home of the blues. With a culture unlike any other neighborhood in Dallas, Deep Ellum attracts people looking for a good time. Local businesses have something for hungry, thirsty and bored locals looking for a quintessential Dallas experience.

Rise and Shine at Fiction Coffee

Start the day with a cup of coffee. The renovated Continental Gin Building near Elm Street not only houses swanky offices and coworking spaces, but the latest iteration of this native Dallas cafe that has expanded to multiple locations. Fiction has always had a knack for making the spaces that serve its coffee as important as the coffee itself.

The comfortable seats of Fiction.

This outpost has lots of mixed seating with polished blond wood, marble, and exposed brick that are a distinctive feature of the neighborhood. With seasonal drink specials and a welcoming vibe even for an old cup of filter coffee, there’s a little something to wake everyone up here. It also offers a selection of breakfast burritos provided by Tacodeli and fresh pastries from the nearby Commissary Bakery.

They say simplicity is the ultimate sophistication. Angry Dog follows that mantra by dropping all excess and giving people what they want: old-fashioned burgers and craving-worthy hot dogs. Highly praised by locals for capturing that 4th of July grill vibe, everything on the menu, including the ice cold beers, is down to earth.

Cool off at Picole Pops

Picole Pops has a sizable selection of popsicles that not only keep you cool in the Texas sun, but have an alcoholic kick with flavors like rumchata and mango margarita. The non-alcoholic flavors are also commendable; they range from a creamy toasted coconut to a Nutella Strawberry Banana Cheesecake.

Electric Shuffle brings shuffleboard into the 21st century, and Deep Ellum is home to the chain’s first location in the United States. Electric Shuffle features multiple game modes, aided by modern technology to entertain players as they attempt to slide their puck to victory.

Between laps, enjoy a wide selection of drinks or snacks, including the Spicy Lucy (a jalapeno-infused tequila margarita), Old Fashioned, espresso martini, frozen watermelon margarita, and Aperol frozen spritz. If you’d rather hang out, Electric Shuffle is a veritable Instagrammers’ playground with vintage electronics and posters from the 1950s and beyond.

Hang the Japanese barbecue at NIWA

Be sure to be at the gates of NIWA by 6 p.m. as it fills up quickly. Setting up a reservation in advance is always a good idea. NIWA offers a yakiniku experience where diners grill their food at the table. This Japanese restaurant has been delighting customers with its incredible assortment of meats and vegetables since 2016. In addition to meat that ranges from pork jowl to Japanese A5 wagyu, it offers a mind-blowing assortment of sake.

Sip and cruise Off the Record

Deep Ellum wouldn’t be what it is today without the music, and there’s no better place to cut one-of-a-kind vinyl than at Off the Record. Located away from the main hustle and bustle of Elm Street, Off the Record never seems to run out of live music, listening parties or well-known DJs on its events calendar. Even if you don’t own a record player, the bar’s giant selection of local beers on tap can keep you entertained as you leaf through the endless rows of album covers.

Get some rowdy tequila at Ruins and the Limbo Room

Divided into distinct locations, Ruins fulfills two essential needs for any Deep Ellum tour: loud music and good tequila. For a more relaxed and social cocktail experience, the main room at Ruins is the place to be. Bursting with art in a beautifully chaotic way, the space has influence from Mexico, Latin America and the Caribbean. This extends to food and drink, with the kitchen serving dishes such as nopalitos fritos and pippin rojo until 2am.

Tex-Mex is on hand for all those late-night cravings.

The bar follows suit, featuring a tequila and mezcal bar with over 100 selections spanning multiple regions of Mexico and dozens of different species of agave. They also don’t hesitate to present their selection with cocktails ranging from refreshing and fruity to downright wild, such as the Diabolico, containing mezcal, Lunazul blanco tequila, Strega, lime, passion fruit, chicha morada and Fuego bitters.

Stepping into Ruin’s concert hall next door, the Limbo Room, is a surefire way to get your blood pumping. Bands and musicians, local and regional, almost always play in the ambient and highly stylized room.

End the evening on the right foot at the Twilite Lounge

When it’s late, all the loud music from the other bars is still ringing in your ears, and you want a place to chill with friends, head to the Twilite Lounge. This casual dive bar has a good assortment of cocktails and drinks served in a New Orleans-inspired space. Live music is (usually) quieter, allowing for conversation, and the back patio is a relaxing oasis in Deep Ellum’s concrete sprawl.